A Perfect Example of the Influence of the Media: The Cartoon Crisis 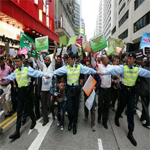 It was September, 30th in 2005 when Jyllands-Posten, a Danish newspaper, published the cartoons which were to create a huge wave of indignation among Muslims all over the world. The assaults against Islam and Prophet Muhammad in the media were probably not a new phenomenon, but the twelve cartoons depicting and denigrating Prophet Muhammad can be accepted as the turning point in the confrontation between the Muslims and the advocates of Islamophobia, between an unlimited freedom of expression and a responsible freedom of expression.

The cartoons soon became the part of various events, political protests and diplomatic action. All over the world, millions of Muslims, as well as some groups from other religions, protested against the cartoons and the Danish government, demanding an apology for the denigrating cartoons. But neither the Danish newspaper nor the Danish government ever apologized. They insisted that the cartoons were to be allowed in keeping with freedom of expression and refused to take a back down.

Nevertheless, these events are not only confined to the notion of freedom of expression. The influence and the role of the media in the expansion of the protests against and the support for the cartoons are undeniable. Through the media, the cartoons published in a Danish newspaper -one that was not known world-wide before- became an international phenomenon. Despite various reactions among Muslims, the Islamic world was perceived as being a separate segment in the international society and Islamophobia became one of the most discussed topics on the international agenda. This is a perfect example of how the media can determine the direction and the content of the international agenda.

On the other hand, the discussions that took place in the international media helped for many different aspects of this one phenomenon to be perceived. First, despite the offensive arguments of the advocates of Islamophobia, there was a great deal of self-inquiry about who is right or not, about whether freedom of expression should be unlimited or responsible, and everyone began to seek answers for the question of "how can we live together?" After the cartoon crisis and the discussions in the media, both Europeans, in particular Danes, rediscovered the existence of the Muslim population in their countries. Both the non-Muslim Europeans and the Muslims became aware of one another. Apart from the protests where Danish flags were burned, there were a number of initiatives taken in order to help others understand their Muslim neighbors and to help discover the formula of how to live together and respect one another without renouncing freedom of expression. In this sense, the media has been the most important area in which these discussions have taken place.

Secondly, the cartoon crisis provided Western media with an opportunity for self-reflection: How could they have failed to explain the viewpoint of five-sixths of humanity to their own populations? How could a free press have been so irresponsible? (1) The virtues of freedom of expression would be better appreciated in the rest of the world if the Western media, which dominate the world's airwaves, encouraged two-way traffic of ideas instead of the current one-way. The open bewilderment of the Danes and Europeans at the global Muslim reaction to the Danish cartoons only reflects the widespread ignorance of the conditions in the Muslim world. It is no great secret that the Muslim world feels trampled upon by the West. They resent the double standards of the Western media in human rights, protesting strongly when non-Muslims are killed, as in East Timor, and protesting mildly when Muslims are killed, as in Palestine and Iraq. The Western media has convinced the public in the West that they are paragons of virtue as far as human rights issues are concerned. But the Muslims, together with most of the five billion people who live outside the West, are acutely aware of the double standards. (2)

Twelve cartoons published in a national newspaper and the outcomes of these cartoons... Surely, there is much more to discuss about the effects and the results of the cartoons crisis, but in terms of the influence of the media, particularly in the Islamic world and its relations with the rest of the world, we can say that the cartoonists have attained a consequence that is far beyond their goal, a consequence that may open new doors to mutually respectful relations between Muslims and others and, in the long term, in developing a responsible style of freedom of expression.

Islamic Values in the Face of Dissension

Robert Hefner: The debate is over and Huntington has lost

A Perfect Example of the Influence of the Media: The Cartoon Crisis