A Response to 'My Take: There’s no such thing as the Bible and never has been' Adilah S. Muhammad 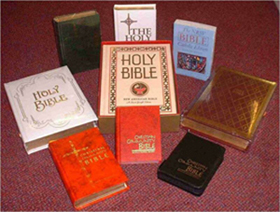 On February 22nd, author and professor Timothy Beal unleashed an oft repeated stance on Biblical error.  His blog entry, My Take:  There’s no such thing as the Bible and never has been, points to the reality that there have been as many versions and iterations of the Bible historically as there exist today.  He believes that Christians who rely upon the Bible as the foundation that “will not faulter in the storm” is a mere illusion.  Beal asserts that the various Bibles in existence “are not only different in physical form, but their value-adding content is also values-adding, steering readers toward theological, moral and political views.  While Beal’s statements may appear harsh, his views are similar to the Islamic outlook of the Bible.  The Islamic understanding of Biblical error is one that has informed the development of the faith from its very beginning.

Islam as a faith is built upon the restoration of the divine message given to Jesus (saw) and build upon the universal message given to mankind.  While Muslims do believe that Jesus (saw) was given the Injel or New Testament, they differ from most Christian majorities in the belief that the Bible is the unadulterated Word of God.  Beal addresses the fact that the Catholic Bible, Protestant Bible, various Orthodox Bibles, etc. all differ in the version of and number of books contained in each.  Uncovering what God really says would require knowing which Bible is the truth or the most reliable account of the truth.

Though there are differences in opinion both within and outside Islam concerning potential nuances in historical Quranic transcription, all Muslims have a universal conception of the truth as revealed by the Prophet Muhammad (saw).   Although it is convenient to think of the Prophet Muhammad (saw) as being given a book, he was in fact not given any material object that would resemble what we call a book today.  The series of revelations he received that we now refer to as the Quran embody the recited message in a written text. Though there are several translations of the Quran that exist, the Arabic of the Quran remains the same as it has been since the first compilation of the Quran.

The Quran (literally meaning recitation) has been relatively safeguarded against the historical errors of Biblical compilation. During the  Prophet’s (saw) life, he committed to memory the revelations received through the angel Jibril  from God beginning in the year 610 CE.  The angel Jibril was said to have checked Muhammad’s (saw) memorization by reciting the Quran with him. According to Bukhari, the angel Jibril commanded Muhammad (saw) to recite the Quran each year during the month of Ramadan.  In the same tradition, Muhammad (saw) is said to have recited the Quran with Jibril twice during the year of his death (6: 518,520).  This tradition indicates a great insistence upon oral accuracy.  Those amongst his early followers also committed the recitation of the Quran to memory. Given the cultural art of poetry and memorization in pre-Islamic Arabia, the transmission of the Quran was enabled by the art of the time.  Muhammad’s early companions were instructed to memorize the Quran and met often to ensure that the Quran was correctly memorised.

Committing the Quran to memory during the early period of Islam  also served as a means of protecting it from destruction.  According to Ibn Omar, the Prophet instructed his companions not to bring any portions of the written recitations into battle with them. “Do not take the Quran on a journey with you, for I am afraid lest it should fall into the hands of the enemy (Bukhari 4:233)  Many believe that this tradition indicates that the Prophet’s (saw) insistence upon leaving the Quran behind is further evidence that the Quran was also written down during the his lifetime. The leaves, and other fragments of materials upon which the written Quran was recorded needed to be left behind to be maintained as a written record.  In later years, the ability to cross check oral recitations with written recitations would become essential to maintaining integrity of the compiled Book. 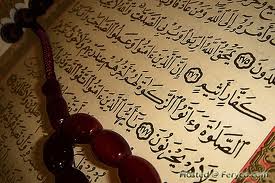 Following the Prophet’s death, the need to compile the written portions of the Quran became more apparent.  Many of the Prophet’s companions who had learned the Quran directly from the Prophet were killed during battles particularly during the bloody battle of Yamama.  With the the loss of several companions  Abu Bakr al Siddiq (RA), the Prophet’s successor, ordered Zaid bin Thabit, the prophet’s primary scribe, to gather and cross-check all written accounts of the Quran with the recitations of the surviving companions. Oral recitations were compared with written recitations to assure accuracy and continuity. In Bukhari, Zaid describes this undertaking as nothing less than extraordinary "...By Allah, if he (Abu Bakr) had ordered me to shift one of the mountains it would not have been harder for me than what he had ordered me concerning the collection of the Qur'an... So I started locating the Qur'anic material and collecting it from parchments, scapula, leafstalks of date palms and from the memories of men.(Bukhari 6:60)

The final compilation of the Quran was first held in the trust of Abu Bakr, then Omer bin Khattab, and then his daughter Hafsa each until the term of their death.  Though the Quran was compiled, many companions had maintained their own written Quran.  As Islam spread over the Middle Eastern region, so did the variations in reading it due to the wide variations in the Arabic dialects.  During the Caliphate of Uthman bin Aaffan, a standard version of the Quran in the Quraishi Arab dialect was ordered.  The translation of the Quran over multiple dialects had resulted in variations in suras that showed variation with the Prophet’s original recitation.  Variations that did not meet the standard of comparison were destroyed so as not to transmit unintended meanings.

While this is an abbreviated account of the Quran’s development, the relevant point is clear.  The Quran throughout its development into an actual book can be historically traced and accounted for.  Muslims do not shun the reality of their having been variations in capturing the written account of the original recitation.  What is important is that there were various checks and balances along the way that prevented the Quran from reaching the fate of the Bible.  Understanding the numerous moments in Quranic history that could have contributed to a deviant account of Muhammad’s (saw) Quran provides a simplified basis to gain perspective to what has contributed to the numerous variations of Bibles that exist today.

Though the history of Biblical compilation is compounded with events that are not mere errors in repetition, it must not then follow that there was never an existence of a book or recitation.  Timothy Beal  points to the 4th century canonization of the Bible along with its many  unofficial varieties as proof that there is nor was one single Bible.  However, what it really points to is there was no oversight to its transmission from person to person, age, to age , and culture to culture.  While this may imply a significant movement away from original sources, it does not follow that the source never existed.  He wishes for the Christian (and by extension the Muslim) to shake of the notion that Jesus (saw) ever received revelation.  In his opinion, the belief in a “pure unadulterated , original Bible, “in the beginning,” is an illusion that shields and distracts us from the real unstable, often terrifyingly ambiguous relationship with  one another that is the life of faith.”  The Muslim agrees.  Islam answers the gaps and multiplicities of scriptural differences.  It provides the link to that “original, solid rock, a foundation that will not falter in the storm” that he speaks of.

If it is Beal’s belief that the burden of proof lies in being able to trace revelation back to the pure, original revelation and a central publishing house or religious authority to standardize the process, then the Quran passes his criteria. The Quran does not exist for the sheer benefit of promoting a way of life, but for the confirmation of what came before and what will proceed.  That it does.  Beal says. “The wilderness, like the ones in which the Israelites wandered and Jesus was tested, can be a place of danger and disorientation, but also of renewal and reawakening.”  While the search for the Bible may not lead to a Jesus’ original text that can be held in one’s hand, it does lead to a text that can be held in one’s memory. The Quran is the rock that breaks the past and provides the means to dam the river.

Brief History of Compilation of the Qur'an. Perspectives. Vol 3, No. 4, August/September 1997

A Search for Christ's Essence

A Response to 'My Take: There’s no such thing as the Bible and never has been'