Majidi's Portrayal of the Prophet and Its Analysis from a Historical Perspective Asst. Prof. Fatımatüz Zehra Kamacı

Fourteen centuries have passed over the divine call of the last prophet, Muhammad Mustapha (pbuh) - the call that had started in Mecca and invited people to unite around the common ground of monotheism. Within this period, countless works about the life of the Prophet have been published both in prose and in verse, in the West and the East. Scholarly or literary writing about the Prophet still continues in Muslim and non-Muslim geographies without pause.

The film “Muhammad” (2015) by Iranian director Majid Majidi is the second major production following “The Message”, both of which are a result of the effort to introduce the Prophet in the form of cinema. Every text written, every word said about the Prophet is precious. It is obvious that there can be no justification whatsoever to deliberately making untruthful attributions to him. In order to make a film on the life of the Prophet, it is necessary to hold on to solid narrations, minimizing fictional elements. Our sources regarding both Mecca and Madina periods have adequent information to provide basis for tens of film scenarios. Looking at these narrations, it becomes clear that there is no need for fiction except small gap-fillings. However, unfortunately, Majid Majidi’s film has many elements that are not compatible with historical facts about the Prophet’s life. We can list them as the following:

1. In the movie, Banu Umayya vs. Banu Hashim conflict marks the period between the birth of the Prophet and the boycott days. With far-fetched interpretations and fictitious narrations, it is underlined that the members of Banu Umayya family had a negative attitude towards the Prophet since his birth. To serve this purpose, historical figures and events are distorted.

2. In the boycott period, Abu Jahl is replaced with Abu Sufyan as the leader and spokesman of Mecca. He leads the role in every conversation against the Prophet. However, no data exists in our sources pointing such a central position of Abu Sufyan in the pre-migration period. The image choice for Abu Sufyan is also noteworthy. It is easily noticed that an ugly and repulsive character is purposefully chosen for him.

3. Information provided regarding Umm Jameel is pretty problematic. According to the movie, she deprived the Prophet of milk and led Abu Lahab to hold a grudge against his nephew since his birth. She even caused Abu Lahab to plot murder against his nephew and pay a Jew for this purpose. This is a distortion of reality that goes beyond fiction. Abu Lahab’s hate towards the Messenger of Allah is in fact a polytheistic hate that arises after the Messenger's call to Islam. Attributing this to the jealousy of his wife, who belonged to the Umayya tribe, cannot be justified by the language of the film or fiction. Here appears an obvious sectarian bigotry. The reason why Umm Jameel is mentioned negatively in the sources is not because she was a member of Ummayya tribe but is due to the pain she caused to the Prophet and his family in the course of invitation, as mentioned in Surah Lahab (Quran, 111).

In the film, Abu Talib appears to have become Muslim long time ago and be in a position of preaching Islam to the polytheists. The same applies to Amina, the mother of the Prophet, too. These points are in clear contradiction with the information in our sources and they seem to be motivated by a Shiite approach with the concern, “How come Ali's father is not Muslim?”

4. In the film, Abu Talib appears to have become Muslim long time ago and be in a position of preaching Islam to the polytheists. The same applies to Amina, the mother of the Prophet, too. These points are in clear contradiction with the information in our sources and they seem to be motivated by a Shiite approach with the concern, “How come Ali's father is not Muslim?”

5. The real factor for ending the boycott was the opposition of prominent polytheist leaders of Mecca such as Abu’l Bahteri and Abdullah bin Jud’an to the oppression and pressure on Banu Hashim and Banu Muttalib tribes. In the Meccan society where tribalism was very important, boycott had caused a serious discomfort among the polytheists. Likewise, there were many social, political and economic factors behind the boycott incident. The film disregards all these factors, takes the easy way out and highlights the insects eating up the papyrus. 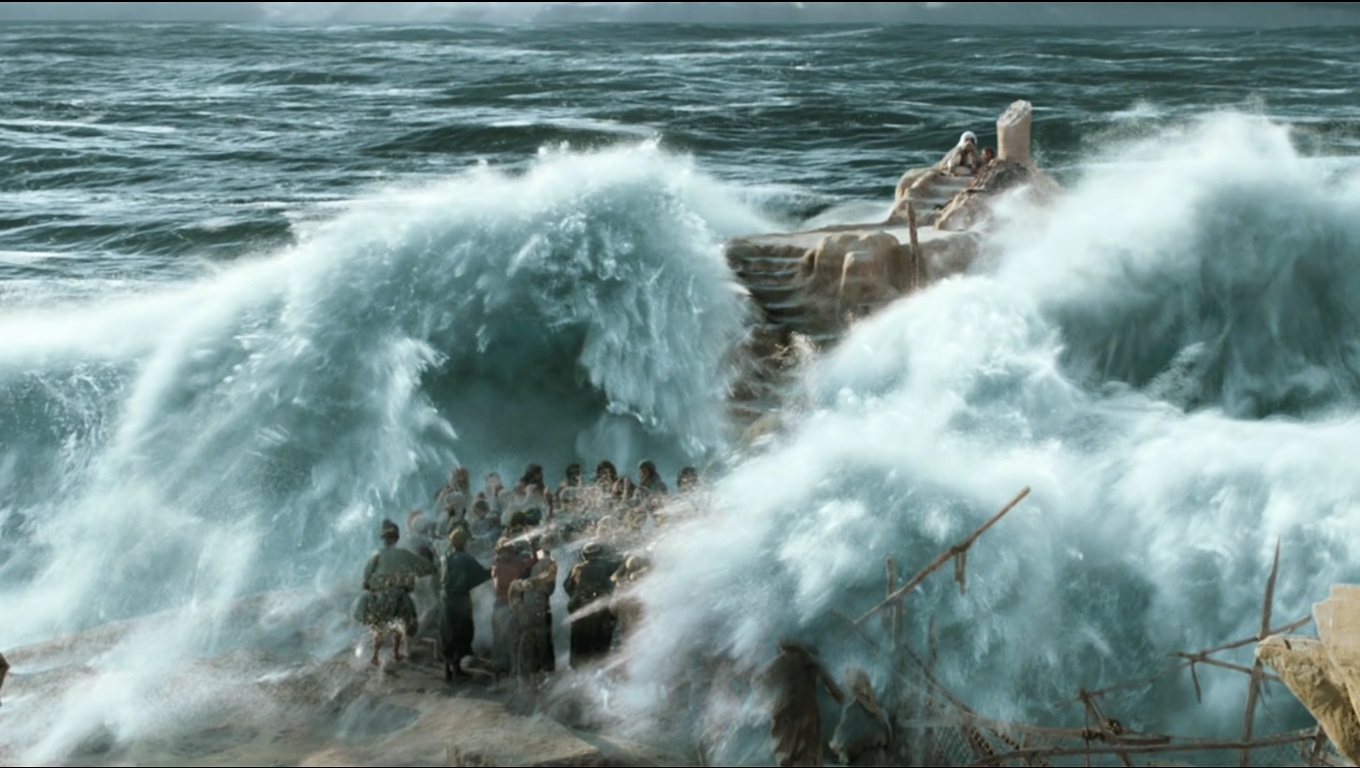 6. One notices an obvious tribute to the Christians and belittlement for the Jews in the film, yet this kind of emphasis is not historically possible in the Meccan period. The film is set upon Jewish Samuel’s chase of the Prophet in every step since his birth. While this is nothing but fantasy, the film projects it as if it is a historical reality. The return of the Prophet from the place of his wet nurse Halima to Mecca is also completely linked to Samuel’s chase. So much so that the Prophet is brought to Mecca secretly for the fear that some harm would touch him as he is constantly followed. Then his grandfather Abdulmuttalib takes him into the cave Hira, hides him there, then makes him meet his mother Amina and only for this reason that he sends him to Medina. The chase continues in Medina where Abu Talib goes upon a dream he had. He gets worried about the Prophet, fights there with Samuel’s men and takes Prophet Muhammad back to Mecca. This incident even turns into a crisis between the Jews and Meccan polytheists and the Jews are banned from doing trade in Mecca. None of these scenes are based on any narration, any information in the authentic sources. Persons and their roles are purely imaginary and all about fiction.

One notices an obvious tribute to the Christians and belittlement for the Jews in the film, yet this kind of emphasis is not historically possible in the Meccan period.

7. Presenting the Prophet as a person who works miracles since his childhood is not compatible with the information in our sources. From its beginning onwards, the film projects the Prophet almost like a “healer”. He gains this feature at young ages and this way he saves his wet nurse Halima from an absolute death. This matter even leads to a rumor and the neighbors begin to seek remedy from him. However, the Prophet did not have such a merit in the years he started his call (invitation to Islam) in Mecca. During those years, the only thing that people in Mecca said of him was that he was “Muhammad al-Amin” (trustworthy). Not only did he lack being a healer or having extraordinary skills, the polytheists even found it odd that he claimed to be a prophet and they challenged him by saying, “Now that you’re a prophet, show us some miracles!”

8. In the film, Abu Talib is shown as a person who has known since his nephew’s young ages that he would become a prophet, who is a believer in him and who takes orders from him. Neither in the period before prophethood nor afterwards does such a relationship between the Prophet and Abu Talib exist.

9. The physical structure of Medina depicted in the film is not based on historical facts. “Mecca is an arid place. Medina has a volcanic landform, eligible for farming.” This is a known phenomenon. However, Medina is shown as if it's a full-green area with springs and rivers flow everywhere. Large-scale growing of roses, apples and other fruits are examples that are not in accord with historical facts.

During those years, the only thing that people in Mecca said of him was that he was “Muhammad al-Amin” (trustworthy). Not only did he lack being a healer or having extraordinary skills, the polytheists even found it odd that he claimed to be a prophet and they challenged him by saying, “Now that you’re a prophet, show us some miracles!”

10. The custom of wet nursing, which is difficult to understand in today’s conditions, depended on two grounds in the period in question. First is the inconveniency of physical conditions of Mecca, and the second is the emphasis for learning Arabic from the fluent language of the Bedouins. Every woman who gets married and has children must hold these tradition-based postulates. Therefore, the exaggerative scenes about Amina not wanting to be separated from Muhammad (pbuh) and the longing she experiences do not reflect historical reality.

11. The story of Monk Bahira, which is controversial in terms of its accuracy, is not told according to the accounts we have. The sources that narrate the story of Bahira describe him as an eremite monk and mention a small monastery he lived in. Contrary to these narrations, Bahira in the movie is depicted in a very sumptuous way. Moreover, the statements Bahira utters during his conversation with the Prophet remind the spectator the discourse that claims that the Prophet learned Islam from Bahira. According to the Christian rebuttal discourse, Prophet Muhammad asked Monk Bahira some questions about God and got some information from him. In the film, Bahira saying to the Prophet incidentally as if in a teaching manner, “What do we say first?... We believe in such and such God, don’t we?” echoes once again the rebuttal works.

12. The film seeks to generate an image of a prophet that heals the sick as a child, protects the weak, breaks the idols, stands against sea waves, brings abundance, and impresses everybody around him with this wondrousness. In many ways, the Prophet is sought to look like Jesus (pbuh). While Shite elements in the film obviously root in Majid Majidi himself, the effort to make him look like Jesus may have to do with Hollywood linkage.

The statements Monk Bahira utters during his conversation with the Prophet remind the spectator the discourse that claims that the Prophet learned Islam from Bahira.

In conclusion, it is clear that the movie “Muhammad” by Majid Majidi is a film that is full of fictitious scenes that have no basis in authentic sources. In the cinema sector, which reaches millions in a short time, it is saddening to see a Muslim director try to make an image of the Prophet that is far from reality. All the lessons must be drawn from this experience. As a matter of fact, Majidi’s film stands as a clear indication that well-qualified, trained, sincere Muslims are needed in all fields of art including cinema.

Muhammad:His Life Based on the Earliest Sources

The Importance of Zuhd

The Wives of the Prophet

Can the Power of Prayer Alone Stop a Pandemic Like the Coronavirus?

Friday Sermon: The Prophet and The Community of Trust

Bless Us in Rajab and Shaba'an...