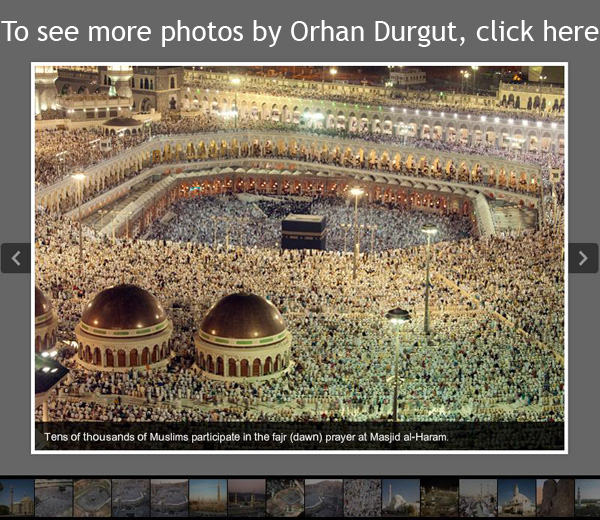 Aerial photographer Orhan Durgut, who has photographed many different places around the world and who has become prominent with his works on the cities of Mecca and Medina in recent years, shared his impressions about the Holy Lands. In the aerial photographs of Orhan Durgut, who has been documenting the changes in the places that witnessed Prophet Muhammad (pbuh) during the last three years, many things are evident, such as the demolished buildings around Kaaba and the luxurious ones that replaced them, the final stage of the area where the circumambulation takes place, the road that was built between the two small mountains of Safâ and Marwa, the subway that was recently established, and the immense change in Medina. 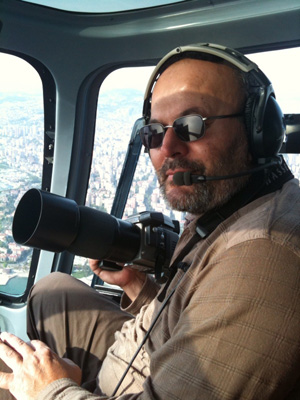 Orhan Durgut was affected mostly by the shots which enabled him to witness the prayers of 5 million Muslims on the day of Arafa, from the sky.

After the era of Sultan Abdulhamid, no professional work of photography was carried out in Mecca. What inspired this idea to include Saudia Arabia in your portfolio?

The story of the first photograph that was taken in Mecca 120 years ago was actualized thanks to Sultan Abdulhamid. After Sultan Abdulhamid, control of the Holy Lands was passed from the Ottoman administration to the Saudi administration. As you know, the Saudi administration is acting with great caution when it comes to photography in that particular area.  You cannot find photos that were taken periodically in the region, in the 1940s, 50s and 60s. It means no photo of a place was taken successively in two consecutive years. Muslims who travelled to the Holy Lands to fulfill their Hajj duties have always taken photographs illegally. Photographs from previous years were neither taken through the same eye, nor photographed with the same machine; hence, they never reflected the same soul. There are plenty of photographs of the Kaaba, but very little of the surrounding area of Mecca. Much effort is required to compile an actual archive about the Holy Lands, as Sultan Abdulhamid did. I formed an archive that included nearly 40 thousand photographs which were taken in this region. I hope that people can benefit from this archive in 120 years.

How does it feel to view at the Holy Lands from the sky? What do you feel exactly at that moment?

Being in the sky on the day of Arafa brings about feelings and emotions that cannot be expressed in words. Just imagine, 5 million people opening their hands and praying, and you are watching this scene from a helicopter. Believe me, you do feel the energy of those prays. I am grateful to God for letting me experience these feelings.

You have a special permit that allows you to take photographs in Saudia Arabia. How do you work?

I don’t accept assistance from any institution. I make a personal effort to take photos of Mecca and Medina. The mayor of Mecca enacted a permit for us to fly with a helicopter and take photos from the sky. Aside from the personnel, 10 other people are present in the helicopter. I try to participate in these flights each year. However, it is important to state that having a helicopter under you and a camera in your hand doesn’t mean that you are going to take splendid photos. One needs to put his heart into this work. I didn’t have the chance to go this year. I requested photos from a photographer by the name of Taif. In the photos, you see the views of the clock tower that was built right next to the Kaaba, with more views of the Kaaba. I didn’t see one picture of the Kaaba which expressed that spirituality.

You know all the important places in Mecca and Medina very well. When you are in the helicopter, what do you witness? Were their any shots that really impressed you?

Until now, I had a flight experience of 60 to 70 hours in Arabia. Depending on your mood that day, things that impress you may differ. It is impossible not be touched by the splendid crowd during the Hajj period. The array of emotions that are felt cannot be expressed in words. Sometimes they ask me, “How many doors does the Kaaba have?” I have been going to the Holy Lands for more than thirty years now, and believe me, counting the number of doors never crossed my mind. What is important there is not the shape of the structure; it is the spirituality that is felt.

The first photo of Mecca that was taken in the course of history belongs to the Ottoman officer, Colonel Sadik Bey. When you compare it with the photos of today, what differences do you see?

The region is continuously changing. My first visit to Mecca was in the year 1977. From that day on, cranes have always been circumambulating the Kaaba. For 400 years, the Holy Lands were under the auspices of Ottomans. After our time was up, this custodianship changed hands. Whether we like it or not, some sort of change always occurs. Each year, changes take place depending on the needs of people. These works are all done for the benefit of humanity. What we should do is show respect and try to help. We live in a different geography. We may not know the needs of these people. We may criticize the works conducted from an architectural perspective. The new buildings might be built a bit far from Kaaba. The buildings constructed are extremely pompous and luxurious. Turkish people criticize these buildings the most, but ironically, they are the ones staying in these buildings. How we look at the subject is critical. Some say: “How fortunate that this clock tower was built here. Now, we can follow the prayer times.” While the others say; “Why was this clock tower built? It distracts my attention while I am worshiping.” Most Muslims coming from Nigeria sleep on the streets. There are people who don’t know how to use escalators. It is difficult to identify the needs of people from different cultures.

Do you think this transformation in the Holy Lands will make some people happy?

Turkish people have prejudices. They disliked the Arabs even before getting to know them. For instance, at my last visit, there was a Turk praying next to me at the Kaaba. He prayed for a very long time. I asked him which prayer he was performing. He said: “This imam is a Wahhabi. Performing prayer behind an imam brought by the King won’t be considered acceptable. That’s why I am making sure my prayer is guaranteed acceptance. I took a little from the imam’s prayer and performed my own again.” Just imagine, there is even criticism towards the imam of the Kaaba. We can call a dog on the street an “Arab.” However, in Arabia, I haven’t heard anyone calling a dog that they have seen on the street a “Turk.” Thus, we need to set aside this prejudice. You cannot make everyone happy, and the aim should not be making others happy anyway.

Your book named The Sacred City of Mecca from the Skies (Sema’dan Mekke-i Mükerreme) has the characteristics of [historical] documentation. Can you give us information about this book?

In the year 2007, I took photographs of Mecca from a helicopter for the first time. From that period on, radical changes were made. More than three thousand buildings around the Kaaba were demolished. Expansion works were conducted at the area of circumambulation, as well as the road to the mountains of Safa and Marwa, and around Haramayn (Cities of Mecca and Medina). I have taken lots of photos during this construction. Moreover, this construction has disturbed people a lot, with the noise and constant renovations. In a way, we documented all of this. From almost 40 thousand photos, we compiled a book with 250 of these. It may be an important source for the years to come. The book was published in three languages: Arabic, English and Turkish.

38 - Last Call to the Polytheists

Madina does not require a new identity, says governor