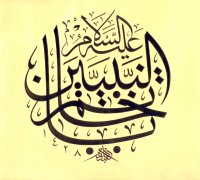 "The Seal of Prophethood" is a title to indicate that prophethood came to an end with Prophet Muhammad (pbuh) and that no other prophet is to follow. In Arabic, this phrase means "to complete a task, to put a seal at the end of something and to seal a writing or document". The term "prophets," within this phrase, denotes "the conveyance by means of revelation of divine wills and messages to some superior and skilled individuals so that these individuals may communicate these messages to their societies". In this context, the "Seal of Prophets" signifies that the intermediation between Allah and His worshippers had come to an end.

"The Seal of Prophets" in the Qur'an

There is a single verse in the Quran that clearly states that prophethood ended with Prophet Muhammad (pbuh) (Al-Ahzab, 33/40). On the other hand, the number of verses indirectly pointing to the issue of the seal of prophets ranges from forty to one hundred according to differences in the interpretation. While commenting on these related verses, all of the interpreters emphasize that Prophet Muhammad (pbuh) had conveyed the last revelation, and that it was impossible for another revelation to be conveyed after him.

"Muhammad is not the father of any man among you, but he is the messenger of Allah and the Seal of the Prophets" (Al-Ahzab, 33/40). The mentioned phrase "seal of prophets" hereby clearly address the fact that Prophet Muhammad was the last link in the chain. The term "hatem (Seal)" as found in the original Arabic of the above verse is read in two ways by the scholars of Quranic recitation due to stress differences. In both of the reading forms, it is underlined that "Muhammad is the last prophet who ended and crowned the establishment of prophethood", which means he possessed a "divine seal" status also approving and confirming all of the previous prophets.

Interpreters also note another point being expressed in this verse. As it is known, the succession of prophets among the Jews, though there are some exceptions, passed down from father to son and continued with lineage. The verse in question constitutes a mental preparation for the reality of the "seal of prophethood." First, the information as to the Prophet having no son to become his prophetic heir is emphasized with the phrase: "Muhammad is not the father of any man among you." This prevented people from going after an expectation that contains the idea of prophetic responsibility being passed down from father to son, and the "seal of prophethood" phrase eventually expressed that he was the "last prophet".

As it is pointed out above, beside this particular verse many other verses indirectly refer to the sealing of the prophetic line. As a matter of fact, the Quran with the verse: "This day have I perfected your religion for you and completed My favor unto you, and have chosen for you Islam as a religion" (Quran 5:3) indicates that society in relation to religion reached the zenith of improvement during Muhammad's time as prophet, that no other prophet is expected to arrive after him and that only the wisdom of Muhammad needed to be followed.

The information as to the Quran being under divine protection (Quran 15:9) is assessed by Muslim scholars as another divine phrase indicative of the ending of prophetic heritage with Prophet Muhammad(pbuh). These scholars emphasized that the Arabic term "nabi" (messenger) was specifically used to reveal the fact that Muhammad was the last prophet. Within the verse (Quran 33:40) containing the phrase "khatamu'n nabiyyin" (Seal of the Prophets), it specifies that no other messenger was to be sent, which leads us to naturally conclude that no other prophet shall be sent either. In accordance with this, the establishment of a prophet remains one that inherently involves holy assignment. As the doors of prophetic selection were sealed, it logically and naturally indicated the end of the holy assignment.

Seal of Prophethood in Hadith (1)

The sealing of the prophets issue was also addressed by the Prophet himself in that he personally spoke of his being the last link in the chain of the prophets. Some of the hadith sources under the "Seal of Prophethood" topic gather the traditions related to this characteristic of the Prophet. Among these in a figurative comparison style and concise fashion is the distinctive account depicting his rank within the line of the prophets with and explaining the removal of need for a prophet after him:

The situation of mine and the situation of the other prophets sent before me might be likened to a person who after the completion, furnishing and decoration of his house leaves a blank for a brick in one corner of his house. When the visitors go around the completed house, their eyes catch the missing part and they can't help saying: ‘It is very nice indeed, yet only if had the missing part not been left incomplete!' Here I am like that cornerstone, the place of which was left unoccupied. Thus, I am the last of the prophets.

Some accounts indicate the closure of the prophetic line by utterance of the Prophet's names such as "akib" and "hasher".

In dogmatic notions regarding the issue, it is noted that no other prophet is to be sent after Muhammad, the "last and the Seal of Prophets". In works such as shamail, khasais, and dalail al-nubuwwa, it is also expressed that in the body of the Prophet there exists a tangible seal and badge of prophethood, a material "sign and indication of [his having been] the last prophet". In these works, it is expressed that previous prophets also had such signs, yet Prophet Muhammad(pbuh)'s prophethood badge and sign were different from the signs of other prophets. This issue was analyzed separately within the hadith, biographies and history books. The term used for this sign of prophethood by the Companions and the subsequent Islamic scholars is "Seal of the Prophets". According to the sources related to this issue, on the Prophet's back between his shoulder blades there was a mark which was tangible, resembling to the shape of a seal and which was metaphorically described by the witnesses as looking like as a rosebud, pigeon/ partridge egg, fist or wart. Islamic sources provide no information as to the date when the "badge of prophethood" formed, yet it is recorded that it was not a birthmark, and it disappeared after the demise of the Prophet. Due to the similarity in terms, some people have mistakenly confused reference to this physical sign of prophethood with a seal made in the shape of a ring that had been used by Prophet Muhammad generally for the various correspondences in diplomatic relations and which was passed on to the next three caliphs who succeeded Him.

The Issue of the Seal of Prophethood as a Religious Obligation

As can be found in sections of Islamic theology books regarding prophets, the "Seal of Prophethood" issue the obvious notions in relation to this issue has been thoroughly analyzed by the scholars devoted to the Quran and sunnah (2). These scholars emphasize that the divine institution of prophethood had come to an end after Prophet Muhammed(pbuh) and that this prophetic heritage was engraved in the pages of history, revealing the religion given to him was to remain perpetual until the end of time. They also agree that this was a matter of a religious obligation. The evidence for this conclusion by the Muslim scholars might be summarized as follows:

1. Some notions on the issue of seal of prophethood have absolutely clear meanings and are impossible to be glossed over. The first among these is the verse that indicates the Prophet is the last of all the Nabis (Quran 33:40). Other verses are also absolute proofs that the True Religion is now complete only Islam is to be accepted by humanity (Quran 33:40), those seeking a religion other than Islam shall be disappointed on the Day of Resurrection and their wishes shall never be taken into account (Quran 3:185), the Quran shall be protected from corruption (Quran 15:9) and the Prophet was sent as a prophet to all worlds (Quran 6:19, 7:158, 25:1, 34:28) The hadith regarding the "Seal of Prophethood" are so clear that any belief contrary to this remains impossible to be adopted. In accordance with this, anyone believing in the Quran and sunnah must absolutely believe that no prophet is to come after Prophet Muhammad(pbuh).

2. The fact that e people who learned Islam from Prophet Muhammad(pbuh) fought against those societies who claimed prophethood is historical evidence as to the issue of Seal of Prophethood. If the coming of a new prophet had not been against the Quran and sunnah, the people would not have fought and killed those arriving with such false claims. Islamic scholars concurred with these people on this matter and concluded that the dissidents would not become Muslims.

3. In addition, it should be reasonably accepted that there is no need for the coming of another prophet. As a matter of fact, Allah sends His prophets to people in order to introduce His existence and unity, declare His orders, convey information on religious and worldly issues that are necessary to be conceived by humanity and show them the right path that will enable them to become blissful both on earth and in the afterlife. The revelations conveyed by Prophet Muhammad(pbuh) literally contain all these necessary aspects. It is possible for people reaching puberty to acquire the necessary information by means of reasoning enlightened by the revelations and find the truth by means of revelation on the issues that are impossible to conceive with senses and mind. Moreover, the prophethood of Muhammad was universal and the revelations he received were never corrupted, thus there was no need for a new prophet. However, the fact that the prophethood ended with Prophet Muhammad bears significant conveyance and representation responsibilities on all Muslims.

4. The fact that no prophet has come after the demise of Muhammad is one of the sociological evidences affirming the closure of prophethood. The claims of prophethood arising from time to time do not change this reality given the people never proved any of their claims and were never taken seriously either in the Islamic world or among the non-Muslims. Thus, such people were considered liars and adventurers and deemed bogus prophets throughout history.

In accordance with this, those who possess no faith in the Seal of Prophethood with the arrival of Prophet Muhammad(pbuh) or those who doubt this fact deem themselves apostates.

1. Meticulously recorded and preserved accounts of the sayings and deeds of Prophet Muhammad(pbuh).

2. The traditions of the Prophet.

Aisha: Lover of the Beloved