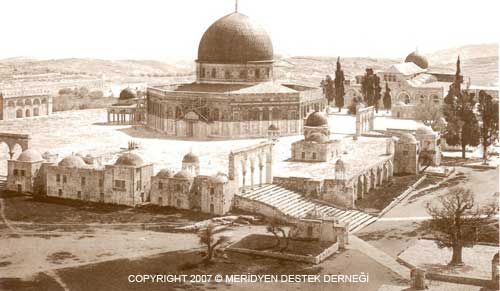 Following both the death of loved ones who were always of great support to him and the cruelties inflicted by the Ta’if townspeople, God honored Prophet Muhammad with the Ascension, allowing him to travel to the spiritual realms. One night, accompanied by Archangel Gabriel, the Prophet was taken from the Sacred Mosque in Makka to the al-Aqsa Mosque in Jerusalem; from there, he was raised to the great station known as Sidrat al-Muntaha, the highest point of any created being's rise and nearness to God. Thereafter, the Prophet was raised to God’s Presence, transcending space and time. This miracle served as an indication that Islam would now move beyond Makka, where it had been confined for the past ten years, and spread to distant lands and nations. Because during this spiritual journey, Prophet Muhammad had led the prayer before the souls of all the previous Prophets, some of whose followers remained in his day and at present. The first part of this journey is called the Night Journey (Isra) and is described in the seventeenth chapter of the Qur’an, which bears the same name. As for the Ascension (Mi’raj), it is described in the first verses of the chapter entitled al-Najm (53:1-18) and is confirmed through many Prophetic Traditions. That the Ascension occurred one year before the Emigration on the twenty-seventh night of the month of Rajab has been generally accepted.

The Ascension elevated the spirituality of the Prophet, consolidated the faith of the believers, and increased the hostility of the polytheists. When the Prophet related this incident to the Makkans, they denied it, dismissing it as fanciful and fabricated. Despite the fact that they received correct information in response to their questions regarding the exact whereabouts of a caravan returning to Makka from Jerusalem, they persisted in their denial. Even if the polytheists wanted to put Abu Bakr in an awkward position by mockingly relating the situation to him, he affirmed its veracity saying, “If Muhammad himself says this, then it must true,” and thus took on the title of al-Siddiq (Verifier of the Truth). The five daily prayers were enjoined on this night, the last verses of the Qur’anic chapter al-Baqara (2:285-286) were revealed on this night, and the forgiveness of all those who do not associate partners with God was proclaimed. The following principles commanded in the chapter relating directly to this night are significant in terms of demonstrating Islam's basic approach to certain issues:

I found this site very useful when completing my home work task on the life of muhummad. Thank you.

Have you ever heard the Call to Prayer?

Prophet Muhammad addressed the Emotions of the Young

Mosques Of The World

Happy Children of the Age of Happiness