A Portrait of Umm Habiba – A Mother of the Believers Adem Apak, PhD

Given the name Ramlah at birth, she was known as Umm Habibah due to the name of her first child. She was the daughter of Abu Sufyan, a member of Banu Umayyah, one of the most important tribes of Mecca. Her mother was Safiyya, daughter of Abu’l-As from the same clan. This woman was also the paternal aunt of Uthman (r.a.). Her first marriage was to Ubaydullah b. Jahsh, the son of the Holy Prophet’s paternal aunt, Umayma bint Abdulmuttalib. Together with her husband Ubaydullah, she was one of the first to become Muslim during the beginning stage of the Holy Prophet’s call to Islam. The Holy Prophet and the Muslims who had responded to his call were subjected to all forms of psychological and economic pressure as well as physical torment – including torture and murder -- by the polytheists of Mecca. In addition to the Quraysh tribes perpetrating these acts, the Banu Umayyah of Umm Habibah’s bloodline nursed a historical enmity toward the Holy Prophet’s tribe, Banu Hashim, and their leaders took part in all actions taken against the Muslims. The Banu Umayyah tribe’s stance in opposition to Islam grew steadily more violent, moving from efforts to convince the Noble Prophet to give up on his prophetic mission to all-out warfare.

As the polytheists of Mecca continued to persecute those who followed the Holy Prophet and turned to Islam, they first preyed upon the converts within their own tribes. Like their fellow Muslim brethren, Umm Habibah (r. anha) and her husband Ubaydullah b. Jahsh were subject to systematic pressure coming from their families. They took their places in the second caravan of Muslims who traveled to seek temporary refuge in Abyssinia upon the advice of the Prophet, who feared that those stripped of the protection of their tribes might leave Islam for fear of death. 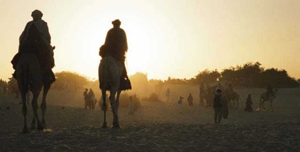 Amidst a more peaceful life in Abyssinia, Umm Habibah (r. anha) was to undergo an unexpected event that negatively affected her life. Her husband, Ubaydullah b. Jahsh, explained that despite all the tribulation he had willingly undergone for the sake of Islam, he had decided to return to the Christianity that he had espoused before becoming a Muslim. Umm Habibah (r. anha) was devastated by this development, and despite her best efforts, unable to convince her husband to change his mind. He also pressured her to return to Christianity. When the differences between them became insurmountable, they parted. After leaving Islam and becoming a Christian, Ubaydullah entered into a coma from excessive alcohol consumption, and died after a short time.

Umm Habibah (r. anha) was rocked by this incident, both abandoned by her life partner and with a newfound vulnerability, alone in a foreign land. As a member of a noble and wealthy Meccan family she could have returned home shortly after arriving in Abyssinia, but no doors were open to her there. For her father, Abu Sufyan, one of the rulers of Mecca, led the oppression of the Muslims. She was either to live a difficult and lonely life in a foreign land, or return to Mecca and suffer her father’s attempts to force her to abandon her faith. Amidst this helpless condition, news arrived that would lighten her troubled heart. A messenger sent by the Prophet, Amr b. Umayyah (r.a.), had arrived from Medina to present to Umm Habibah (r. anha) the Holy Prophet’s offer of marriage. The marriage took place without the Prophet’s presence; with the bond, the Holy Prophet recognized this woman who had sacrificed much in the name of Islam, granting her the honor of becoming one of the Mothers of the Believers.

In the seventh year of the Hijrah (628 A.D.), with the aid of the Abyssinian king, the Muslims returned to the Arabian peninsula. Umm Habibah and her daughter Habibah arrived in Mecca together. It is important to recall that as much as the Holy Prophet honored Umm Habibah (r. anha) through this marriage, it also played an important role in the spread of Islam and establishing unity between Mecca and Medina. Importantly, the Holy Prophet had established a familial tie with his greatest rival, Abu Sufyan, through the marriage. And surprisingly, when Abu Sufyan heard of the marriage, he was not infuriated, merely saying of the Prophet Muhammad (s.a.w.), “He is a man not to be refused.” It is said that an ayah in Surah Mumtahana was revealed regarding this incident: “It may be that Allah will grant love (and friendship) between you and those whom ye (now) hold as enemies." (Mumtahana, 7)Truly, it is undeniable that after Umm Habibah’s (r. anha) marriage, there was a marked softening of Abu Sufyan’s attitude toward and treatment of the Prophet and the Muslims.

In the aftermath of an attack of the Banu Bakr tribe, allied with the Quraysh, upon the Muslim Banu Khuzaa tribe, which broke the terms of the Treaty of Hudaybiyyah signed between the Muslims and the polytheists of Mecca, the ruling elite in Mecca began to worry that the Muslims might exact vengeance. Under pressure from the Quraysh out of fears they would be subject to Muslim retaliation, Umm Habibah’s (r. anha) father, Abu Sufyan, set out for Medina to apologize to the Prophet and request a renewal of the truce. The Prophet (sas) and the Companions Abu Bakr, Umar, Uthman and Ali (r. anhum) refused to deal with him.He then went to his daughter, the Prophet’s wife Umm Habibah, to seek her help. Entering a room in her house, he moved to sit on a bed in the room – but his daughter quickly withdrew the cushion from underneath him. He nearly fell over, asking his daughter, “Did you withhold the cushion from me, or me from the cushion?” Umm Habibah (r. anha) replied: “That is the cushion of the Messenger of Allah. And you are a polytheist.” He grew angry upon this and left the house.

Umm Habibah (r. anha) was married to the Holy Prophet for four years, and lived for 30 years after his death. During this period, she attempted to distance herself from political events and disorder. When the home of the Caliph Uthman (r. anhu) was laid siege and after 18 days they cut off food and water supplies to him, Umm Habibah attempted to bring a mule loaded with provisions to his house, but was prevented by the rebels in a disrespectful manner. Umm Habibah (r. anha) lived out the rest of her life in Medina. Along with this, it is also known that during the era of her brother’s caliphate, she visited the Amawi capital of Damascus, which has led to some claims that she died in Syria. There is a tomb of Umm Habibah (r. anha) in Damascus’ Babu’s-Saghir cemetery alongside the graves of many other Companions. Still, historians are unanimous upon the fact that she died in Medina. The hadiths she narrated are important sources of knowledge for Muslims on the model family life of the Holy Prophet. Umm Habibah (r. anha) was an important hadith narrator in addition to a spouse, and it is known that she transmitted 65 hadiths from the Messenger of Allah.

A Portrait of Umm Habiba – A Mother of the Believers