"Can our Prophet be Depicted?" 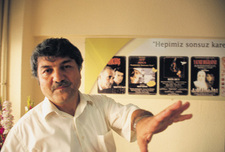 -How do you evaluate the cinema potential in the Islamic world and how do you find films on the Prophet Muhammad (pbuh)?

We all know that a serious cinema sector has not developed in the Islamic world and that our dear brothers have not succeeded in this area. We should be one of the most advanced countries in this world, but it is obvious that our cinema is in a very sorry state. Only the Iranian cinema meets expectations. It is experimenting on a local and festival base. How many of our films have made an impact internationally and gained the opportunity for world-wide distribution? There are just a few that come to mind like “The Message.” I have to say that as a sector we do not have a significant potential in the world cinema.

-Isn’t it possible to create this potential financially?

It is! It definitely is! If it is desired, our films can be made on a world-wide basis; there can be huge productions regarding Islamic history; huge distribution networks can be set up. Regarding films on our exalted Prophet for whom Allah said, “If it weren’t for you, I would not have created the universe,” are there any such films? I do not know of any other than “The Message.” We see some series about Islamic history, but if we are talking about cinema films known throughout the world, there aren’t any. Consequently, our inadequacy in this area is great.

-Have you thought about making a film on the Prophet?

I haven’t thought about it. Our generation is not very tolerant on this subject. Not only our Prophet, but even the role of one of the Companions would have to be played “doing justice to the existing conditions.” I have been scared even while having saints portrayed that I will make a great blunder! These are very sensitive subjects. Even while beginning my cinema career, my main issue was “whether the cinema was a sin or a merit.” Thank God, I have overcome this, but there are many mountains Muslims must overcome in respect to the cinema. There are many unresolved questions in our minds like: To what degree can the female element be used? How possible is it to portray great saints? In the current sector there are no players who know religion well. If they are not suitable to the type you need to have portrayed, what happens?

-Making a film related to the Prophet or saintly people really is a difficult task. Besides finding an appropriate actor, what other kinds of difficulties are there?

If a person portrays a situation he has not lived, it is insipid and not convincing; he can not reflect his feelings to the audience. In the final analysis, cinema is the bouncing of emotion! In this respect, there are many defects in the existing sector! There is a great risk in regard to the players who would portray those saintly people and the team that would put them on film. In one of my films it was necessary for one of the lead actors to perform salah and pray in a mosque. We were going to the mosque after the noon prayer. I said, “Make your ablution.” The actor replied, “I made ablution early this morning before I came to the set!” Our cameraman said that he was born with an ablution! You can imagine the rest. But still, I think that the director at least being aware of meaning and religious sensitivities can pretty much save the situation. A more important difficulty is this: We are coming from a groundwork that rejects pictures, that only allows small snapshots when absolutely necessary, and that has not produced any evidence that it should not be this way. Who knows what sins we are making while shooting a film? I don’t think we even know this much. We have to make films within a framework of dry logic taking into consideration only social benefits. And, may God forgive us, we have to pass judgment on most scenes with our own discernment. Within this delicate framework, the portrayal of those saintly people would not be so easy. I filmed Atif Hodja of Iskipli and Hajji Hasan Efendi of Yahyali, but ask me about the difficulties. I had to get permission from everyone. Another difficulty is that by portraying a saintly person with a particular player you kill the imagination of the audience who has each imagined that person differently in his own mind. As a result, it can be said on this subject: Of course, saintly people can be filmed, but you have to do them justice.

-There is sensitivity in the Islamic world regarding the depiction of the Prophet. Respecting this, how can it be compensated for?

Can our Prophet be depicted? In my opinion, his states, stances, behavior, family life, and psychological dimensions can be given, but definitely without showing his countenance… Within the framework of “I think so,” still on the point of religious sensitivity the subject carries an importance that surpasses my judgment, so it requires fatwa from scholars and sages. Cinema has to take this sensitivity into consideration. I can comfortably say this within my framework of sensitivity: The Prophet’s countenance should definitely not be shown. In order for a director to try this, he would have to be very cosmopolitan.  Years ago, I think it was 1974, when I went with Metin Erksan to visit Sule Yuksel Senler Hanim, we asked for such a scenario, but we were very surprised. She rejected this politely and explained why it was not possible. First let’s enter the cinema sector in the right way as conscious Muslims. Let’s try and establish ourselves there. Let the soil needed to raise such roses be formed. And then we can talk about these subjects.

-OK, let’s assume this opportunity arose. Again within a framework of this sensitivity, if you made a film regarding the Prophet or his message, how would you give prominence to the Prophet and within what kind of theme?

Our Prophet is a model. He is a perfect model of the Quran transformed into life. His genius is at the peak of the world’s quintessence. Undoubtedly, what must be done first is to frame him as a man of physical and spiritual balance. That exalted being was the most striking example of not overstepping one’s boundaries. This is the most obvious trait in the formation of the model. He has no aspect that does not revolutionize the life of the individual and society. He possesses every kind of physical power. But, he was an extremely humble, balanced and normal head of the family. He was an adult with adults, but like a child with children. He was a good father, a good friend and a good companion. I think this was his greatest miracle.

Lesley Hazleton on What You Might Not Know About the Prophet