From Texas to Truth 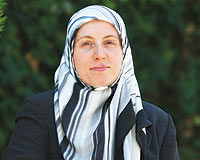 Childhood days on a farm in Texas, a family with roots in England, Germany, Scotland and among the Native Americans, the first questioning of the Church, a search for the truth, a book picked up in the university library one evening that gives the "forty essential questions"... This is how, reared on Christian doctrines, Najla Tammy Ilhan's "Journey to Truth" finally brought her to Islam.

Najla T. Ilhan, who first met Islam and Prophet Muhammad by reading Nawawi's Forty Hadith, decided that she had now met the truth she had been looking for. After becoming a Muslim her decision to settle in Turkey with her Turkish husband was part of her journey to the Truth that had started on the farm in Texas. Ilhan presents the entire journey to her readers in a detailed way in the recently published book Teksas'tan Hakikate Yolculuk (A Journey from Texas to Truth).

Ilhan tells us that her concept of God was developed in the Church and that she believed in the existence of an Absolute Being, but she never lost the feeling that something was missing: "Because I did not know how to fill this emptiness, I prayed for guidance." Najla entered the days of her youth with this prayer for guidance, and they were answered in the form of the 40 Hadith, as explained by Imam Nawawi. She expresses the admiration that was awoken in her when she first read the hadith of Prophet Muhammad:

"I had never heard the name of the person who had said these words. But when I read and studied the words of this wise person I was fascinated. The words filled my mind with the light of knowledge and understanding..."

We discussed her new book and her path to Islam:

"My Heart Ached before I Became a Muslim"

"My Heart Ached before I Became a Muslim"

Before I became a Muslim my heart always ached. There was always an uneasy feeling in me, even if it wasn't apparent from the outside. For example, I had terrible nightmares. I felt unprotected; Allah Almighty could be there and He could be listening to me, but I couldn't reach Him. In any case, I was not aware of Allah before becoming Muslim; I only knew that there was a God. For example I didn't know His 99 names. Now I know that Allah is very close to us and that He is listening to us at all times.

You say that you were first influenced by the Forty Hadith. What do you think it was in the hadith that affected you so much that you made a decision that would change your entire life?

Everything was there. It is this that encapsulates the beauty of Islam; it helps us in every area. It informs us of who we are and what are goal is in this world. When I read the Forty Hadith, I saw that Allah had given us a system for life. Everything is connected: everything affects everything else. I learned from those hadith how important time and our life are, and how it was necessary to use both in an organized way. The hadith encapsulate everything and with them a wide road stretches in front of us. It was this unity that affected me the most.

Before you became a Muslim your life was still religious. For example, you distanced yourself from superstitions...

The religion of my father treated such subjects like this. And this was logical. When you examine a belief, it is easy to understand whether it is founded in reality or superstition. For example, knocking on wood...How can that protect you against anything? Alhamdullilah, I had an education that allowed me to understand this. In any case, Allah creates us with such a nature. This helped me to keep away from many errors in my religious education as a child. However, I was not happy. I started to search.

After a while during this search, my hope began to fade. Fine, Allah created us, but I couldn't find the solution to how I was to find Him or how I could find the correct belief. I remained distant from the Church at this point. But in the end I found the answer, Alhamdullilah. Even if it was many years later, I found it.

There were severe reactions to your decision to become a Muslim. What do your family and acquaintances in America think now?

Alhamdullilah, it is much better now. They now accept - although at first they didn't - that I did not come to Islam blindly. Now they can see the beautiful things about Islam. For example, not paying interest....Some of my family don't use interest any more. I advised them not to; I told them to avoid loans with interest payments, and I gave them financial support in this matter. For example, my sister needed a car. I told her not to make an agreement with interest payments. "I am moving to Turkey. I will sell you my car in installments, but without interest," I said. She was very happy, and she didn't have to pay interest. My sister was very affected by this behavior, which I owe to Islam. This means that we must always stand up for what is right. The fact that my sister was not a Muslim was not important; we have to be examples of our beliefs.

Did you encounter any exemplary behavior before becoming a Muslim that helped you adopt Islam?

Before coming to Islam, I was very impressed by the behavior of Murat, who is now my husband. His good manners, his respect for people, the fact that he did not drink or swear ...I was impressed by all of these, but his attention to cleanliness attracted my attention the most. When one looks at America from the outside, it appears very clean, but the personal hygiene of people is not the same. There are many who don't even wash their hands after going to the toilet. I was very impressed by the emphasis that Islam puts on personal hygiene. In America, for example, people take a shower every day, but cleanliness maynot be a matter of concern throughout the day. In Islam one cleanses one's body five times a day. In addition to this, a Muslim should always be clean. And the five prayers a day ensure both physical and spiritual cleanliness...

The daily prayers are a beautiful form of worship. They allow us to take a breather in our daily life, to distance ourselves from the hustle and bustle. And we remember our goal in life as we premember Allah. The prayer separates us from other faiths; that is, it distinguishes us.

In a hadith it is said that when you recite Fatiha during prayer Allah answers you. So Allah answers us with every prayer. This is a wonderful thing! Absolutely fantastic...

It seems that the fast in your first Ramadan affected you as much as the daily prayers. In your book you mention the group iftars at a masjid in America. What was it that affected you so much?

I saw there that I was not a minority. There were other people who believed in Allah and who tried to fulfill His commands. Moreover, we thought of the hungry people in the world together, and we prayed for them. When we broke our fast together, I felt the good feelings increasing. It was there that the idea of doing something for those who were hungry or in difficulty most came into my mind.

There was also something I had never experienced before the iftar meals; a feeling of brother/sisterhood. Before I would go to church, and there would be similar ceremonies, I would have friends, but I had never experienced this feeling of brotherhood. While in the church, I did not share such feelings with the other people. This was not because I was unable to establish a connection; it was because I had not yet found the Truth. And in the church I did not feel that there was enough camaraderie.

Why did you decide to settle in Turkey?

I wanted to come and live in Turkey so that I could experience that feeling of brother/sisterhood every day, every minute. Here everything is very different. I am in a Muslim country. I wanted to get to know Turkey better, to understand its culture and language better. Allah permitting, I would like to go to other Muslim countries like Saudi and Pakistan. I would like to learn where and how my brothers and sisters are living, what their culture is like, etc.

After you arrived did you ever experience anything that made you think "What a good thing I am living in Turkey"?

Yes, I have. When I first came, I boarded a train. I was looking outside. The buildings were flashing past my eyes. Suddenly, a scene became frozen in my mind's eye. I had seen a minaret between two buildings. My heart started to beat so fast...I don't know how to explain it, but after seeing that I thought, "Wow, Alhamdullilah that I am here, among Muslims." In America I always saw churches, but here I see mosques. Here I can hear the adhan; my brothers and sisters fill the mosques five times a day, and I can join them. It is still wonderful just hearing the adhan. Someone is inviting you saying "Come and join us, come and worship Allah with us." It is wonderful to pray with other people here. You are experiencing the feeling of brother/sisterhood in the most wonderful way. This is something that is more important than one's biological brothers or sisters. Before I moved here I visited my sister and she asked me why I had decided on moving to Turkey. She couldn't understand it. I told her, "They understand me better there."

Why did you choose the name Najla?

When I decided to become Muslim my mother said, "You are choosing this religion blindly. You don't know what you are doing because of the love you feel for Murat. One day you will open your eyes and know that you have made a mistake." I wanted to answer her. I hadn't chosen Islam blindly, but rather by asking questions, by investigating and by comparing it to Christianity. This is why I chose the name Najla, which means "wide eyes, wide-eyed". In English if someone has their eyes "wide open" it means that they are seeing clearly. It is for this reason that I chose the name Najla. In short, I chose this name to say to my mother "I haven't chosen Islam blindly."

Highlights from the Lives of Converts

Quicunque Vult: or, My Journey to Islam - IV