Hadith in the pages of the Mathnawi Lastprophet.info

Listen to the reed flute,

its song of separation: 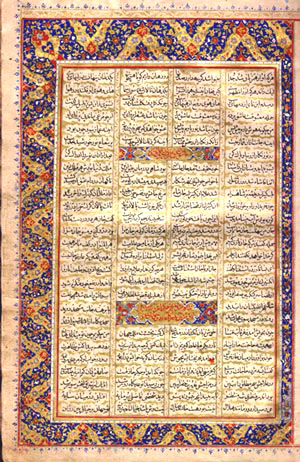 Mawlana's Mathnawi shares the internal journey of man and his spiritual evolution through verses from the Holy Qur'an and hadith through various talmih (referencing) involving stories and tales. Talmih is the art of stating one's point in a suggestive fashion, between words and by not revealing it clearly. It recalls a colloquialism through an event, saying or tale. In this section, we hope to present the stories told using the talmih method, along with the hadith they point to, to our readers. We covered both the hadith covered in the shared tales and the hadith which they recalled. While doing so, we used Mesnevi Şerhi (The interpretation of the Mathnawi) by Tahir ul Mevlevi, Şefik Can's Mesnevi Hikayeleri (Stories from the Mathnawi), Riyadh-us-Saleeheen (Gardens of the Righteous) by Imam Nawawi, as prepared by M. Yaşar Kandemir, İ. Lütfi Çakan and Raşit Küçük as well as Mesnevi Hadisleri (The hadith of the Mathnawi) by Ali Yardım.

Mawlana calls on the reader, saying "Brother! A tale is like the measure and its meaning is like the grains inside the measure. An intelligent person takes the grain; he does not look to see if there is a measure or not," thus drawing them into the meaning embedded in the tale. Because the way the story is told is just the envelope; the meaning is hidden within it. Mawlana, who said: "As long as I live, I am the slave of the Qur'an, the soil on the path of Prophet Muhammad. If any one person gathers that which is contrary to this statement from me words and gets to know me through different means; I am both tired of such sayings and those who come up with such sayings," and turns those who request the meaning embedded in the envelope to the Holy Qur'an and the hadith narrated from Prophet Muhammad.

What follows is a talmih in which the tale in which an event that occurs between Prophet Moses and a shepherd, is told in a hadith of Prophet Muhammad.

"Allah looks not at your faces and posessions, but your hearts and your deeds."

Prophet Muhammad was assembling an army in order to fight against the disbelievers and protect the rights of Muslims. When he assigned a youth from the tribe of Huzail as the commander of the army, an ill-intentioned person objected, saying:

“No, no Messenger of Allah! We do not accept his leadership. While there are experienced elders at hand, a young man, even if he is the son of a lion, should not be the commander of an army. Besides, you had said "The person to be followed should be old and experienced!" These words of yours are indicative of the truth that this assignment is not a correct one. Look at this army; there are so many people who are older and more experienced than the person you have appointed as the commander.”

Prophet Muhammad placed his sacred hand on the mouth of the man who was transgressing the limits while speaking, and said:

“How long do you plan on complaining for? O you who looks only at appearances and sees nothing but the exterior! Don't see him as young, inexperienced and untalented! I've tried that young man's mind many times and he demonstrated that he is as experienced as an old man in various matters. Son! There are so many men whose hair or beards have not become gray yet, yet they are aged in terms of their minds and comprehension. And there are so many white haired and bearded men whose hearts have been darkened and tainted. Think of a child with the breath of Jesus, who has been purged of pride and ambition - how can you call him or her a child?

“When I said that an elder person should be chosen in order to be successful at something, I meant that he is cautious and intelligent. For a person with lack of foresight and lack of observance, the whiteness of one's hair and beard is indicative of their maturity. An imitator knows nothing but proof (indication) and constantly searches for a path with proof. But all creatures who have rid themselves of the veil of imitation see with the light of God. They break the shell in order to expose the essence located inside. What does one who looks only at the appearance, know about what is in the heart! Many a gold piece has been darkened with fumes so that it may be protected from envious thieves. Many a copper piece has been gilded and shortsighted men fall for them. We see the inner dimension of men, their hearts - we do not even look at their exteriors.

"Allah (s.w.t.) looks not at your faces and possessions, but your hearts and deeds."

" Moses (p.b.u.h.) runs into a shepherd. The Shepherd was pleading to Allah, with words that were the manifestation of the love in his heart:

"Oh Allah! Oh the Most Exalted of the Most exalted! May I be your slave, may I sacrifice myself to you. May I saw your shoes and wash your garment, may I comb your hair and free you of lice. May I give you milk, kiss your hand and massage your feet. May I sweep the ground you will sleep upon. Oh ye, whose path is worthy of the sacrifice of all my sheep! Oh ye! Oh ye, the one I recall with oh ye!"

-Who are talking to? Whom are those words directed to?

"I am speaking with the One who created us and the heavens." Moses, then responded, saying,

-Have you lost your mind? Come to your senses! These are words that should not be uttered. You have become a disbeliever even before you have accepted faith! Shoes and leggings are becoming for the likes of you. Are these worthy of the Light? Are you speaking to your uncle in this fashion? Is the possession of bodily form and human needs among the attributes of Allah?

The shepherd says to Prophet Moses:

-"Oh Moses! You have silenced and hurt with your condeming words. You have perturbed me with sorry." The shepherd then proceeded along his way. Then, the Prophet Moses was sent revelation:

- Oh Moses, you have divorced one of Our servants from us! Were you sent in order to bring my servants closer to me or take them further away from me? I created them with different dispositions and gave them differing abilities in expressing themselves. Each one of them remembers Allah in their own language. And Allah understands their language. We don't have need for their worship or remembrance. I have ordered my servants with worship [of Allah] as a benevolence and remembrance [of Allah] for purification. We look at the heart and its state, not words. We look to see if they are truly attached to us, if their prayers come from the heart, and whether there is a flame ignited in their heart. We don't look at their choice of words. Oh Moses! Enflame the fire of love in your heart and burn all of the words and thoughts along with it! Those in love burn in a different fashion at every minute. Neither tribute nor tax can be requested from a village that has been burned into ashes...:

Upon hearing this warning, Prophet Moses would head towards the desert in order to find the shepherd. He would trace the footsteps of the shepherd, locate him and say:

-Glad tidings! You have been accepted into servitude by Allah the Almighty. You have been granted permission to perform worship as you please.

Prophet Muhammad in our family lives

What is the Significance of a Non-Muslim Accepting the Prophethood of Prophet Muhammad?