Hajj in 23 Questions From the Editor

The dictionary meaning of the word "Hajj" connotes facing a big and important matter that is respected, visitation and going somewhere and coming back. As a term of Islamic jurisprudence, it signifies a worship that is performed by Muslims who have the means in specified period of time in a fashion that follows religious requirements in the Kaba, Arafat, Muzdalifa and Mina. Hajj, which is one of the five pillars of Islam, is an act of worship which demonstrates that Muslims are brothers and sisters who are all equal to one another.

2. What is the religious ruling of Hajj?

It is noted in the verses of the Qur'an and hadith that Hajj has been made mandatory for Muslims who have the means to perform it. Some of the verses and hadith on this matter are as follows:

"And proclaim the pilgrimage among men: they will come to thee on foot and (mounted) on every kind of camel, lean on account of journeys through deep and distant mountain highways." (Surah Al- Hajj, 27)

"Islam is based on five principles. Belief that there is no deity except Allah and that Prophet Muhammad (pbuh) is His Messenger, proper prayer, charity, performance of pilgrimage and fasting during Ramadan." (Bukhari, Iman 1. I.8. Muslim, Iman, 19-22)

3. Who can perform Hajj?

In order for the worship of Hajj to be fulfilled, a person must possess the following attributes or fulfill the following requirements:

- To be of sane mind

- To have reached puberty

- To have financial means

- To possess means for a safe travel

- The protection of the life, possession and honor of women

- For women whose spouses have died or who are divorced to have completed the period of iddah (waiting following a divorce or spousal death).

4. What other rulings is there on Hajj other than what has been made obligatory?

There are two other kinds of Hajj stemming from religious rulings; these are wajib (obligatory at a level less than fard) and nafila (supererogatory). Hajj that is wajib is one that is performed by a person even though it is not obligatory on them but is incumbent upon them as it is a compensation Hajj (supererogatory) for one that has been abandoned.

5. How many times must Hajj be performed?

It is obligatory for Hajj to be performed by Muslims who have the means to do so at least once in their lifetime. Ones performed after the initial one is considered supererogatory.

6. At which point in life must a person perform Hajj?

According to Islamic principals, Hajj is obligatory upon a person as soon as they have the financial means to do so. Islamic scholars have stated differing opinions on whether it is obligatory for Muslims to perform Hajj the very year they are able to do so. However the main criteria here is this: A person who delays their Hajj to later years from the year in which they have means, may lose this opportunity for various reasons and will bear the responsibility for the Hajj which he or she didn't perform even though he or she could at the time. For this reason, it is generally advised that one must perform Hajj as soon as possible.

7. What is [which acts are] obligatory during Hajj?

According to the Hanafi school of thought, the following are mandatory during Hajj:

- Performing tawaf around the Ka'ba

According to the Shaf'i school of thought, the following are mandatory during Hajj:

- Performing tawaf around the Ka'ba

- Shaving or shortening of the hair.

- Following the order of most (at least four) of these elements.

8. What should be done if one of these mandatory requirements is not completed?

The dictionary meaning of Ihram is what needs to be revered or entering a place or time. In the context of Hajj, the word means is a person forbidding themselves of certain acts that are halal at other times, in order that they may perform Hajj or umrah or both. Everything that is forbidden during this phase is known as the ihram prohibitions.

10. What are the ihram prohibitions?

The scope of ihram prohibitions is quite wide. In terms of general principals, a person in ihram cannot harm another living being, can't hunt, engage in sexual relations, utter foul words, closely follow the clothing of ihram, shave, etc. Unlike those who don't fulfill the obligatory steps of Hajj, those who violate the ihram prohibitions will not have to repeat their Hajj, however, they must be subject to the relative punishments in order for their Hajj to be accepted. For more detailed information on this matter, see:

The Qur'an says the following regarding the ihram prohibitions:

"For Hajj are the months well known. If any one undertakes that duty therein, Let there be no obscenity, nor wickedness, nor wrangling in the Hajj. And whatever good ye do, (be sure) Allah knoweth it. And take a provision (With you) for the journey, but the best of provisions is right conduct. So fear Me, o ye that are wise." (Surah Al-Baqarah, 197).

"O ye who believe! Kill not game while in the sacred precincts or in pilgrim garb. If any of you doth so intentionally, the compensation is an offering, brought to the Ka'ba, of a domestic animal equivalent to the one he killed, as adjudged by two just men among you; or by way of atonement, the feeding of the indigent; or its equivalent in fasts: that he may taste of the penalty of his deed. Allah forgives what is past: for repetition Allah will exact from him the penalty. For Allah is Exalted, and Lord of Retribution." (Surah Al- Maidah, 95)

In one hadith the ihram prohibitions are listed as follows and these glad tidings are given to those about to perform the Hajj:

"Whoever performs Hajj and doesn't engage sexual relations, utter foul words or sin, than he will return as (pure) the day he was born." (Bukhari, Hajj, 4, II, 141)

12. How does one make intention for ihram?

In order to intend for ihram, one must determine in their hearts whether the worship to be performed is umrah or Hajj, or both umrah and Hajj. It is neither encouraged nor forbidden to make this intention orally.

If a person is entering ihram want to perform Hajj alone; they should make an intention in the following way:

Once they have made the intention, it is time for talbiya.

13. Why is the phrase "Labbayk" repeated?

Talbiya, whose dictionary meaning is following an order, means uttering sentences that with "labbayk" during Hajj.

Talbiya is comprised of words the person who submits to which will befit the glory of Allah. Talbiya must be said orally out loud. It is not sufficient for it to be said the heart.

Waqfa, whose dictionary definition means staying at a certain place for a certain amount of time, as a Hajj term connotes a person who has worn the ihram with the intention of performing hajj, staying in Arafat for a certain period of time following noon on the 9the day of the month of Dhulhijjah. The period of Waqfa is until fajr (dawn) the next day.

Arafat also has an important historical and symbolic meaning as well. The place where Prophet Adam and Eve met after being brought down from heaven was called Arafat, and the day on which they met is called "Arafa."

15. What is the Muzdalifa waqfa?

The time of the Muzdalifa waqfa is determined as beginning from the first day of Eid ul Adha from fajri sadiq (dawn from the line in the horizon) until the actual rising of the sun.

The dictionary definition of tawaf, which means turning and traveling, means turning around the kabah seven times beginning with the point at which the Hajar ul Aswad stone is located. Each of these turns is called Shawt. There are different kinds of tawaf, however, there is a ‘visitation tawaf' which comprises the obligatory portion of the hajj.

In order for the visitation tawaf to take place, the following requirements need to be met:

- The Arafat waqfa must be completed.

- It must have been completed in the allotted time.

- To perform tawaf around the Kaba and within the Masjidi Haram.

- To fulfill at least four elements of the tawaf.

The requirements of tawaf are as follows:

- To have ablution while performing tawaf.

- The physical parts of the body which require to be covered, must be.

- Beginning the first turn around the Kaba prior to the line of the Hajar ul Aswad.

- To walk while performing tawaf.

- The complete the tawaf in seven shawt.

- To perform the tawaf prayer at the very end.

17. When should the visitation tawaf be performed? 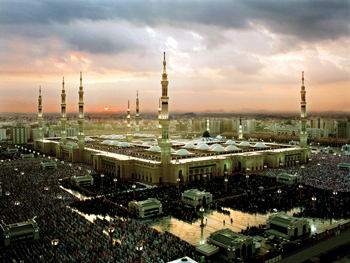 The first day of Eid ul Adha begins with the rise of fajri sadiq (dawn at the beginning at the level of the horizon) It will not be accepted should it be performed before this time. Because the first night of eid until the rise of the sun, has actually been allotted to the waqfa of Arafat.

The dictionary definition of sa'i, which means to perform a task, walk and run, in terms of hajj, means going between the hills of Safa and Marwa -- starting at Safa going four times and returning three times -- located east of the Masjid-i Haram, following the tawaf performed at hajj or umrah. Sa'i is comprised of a total of seven shawt with the journey between Safa and Marwa being one shawt, and the return to Safa from Marwa another shawt.

Sa'i is based on the actions of Hajar (Hagar) (pbuh), the wife of Prophet Abraham, who ran between the hills of Safa and Marwa in order to find water for her son, Ismail (pbuh) The sa'i has been performed between these two hills to commemorate them.

20. What happens during Mina?

"Mina," is the area located between Muzdalifa and Mecca within Harem borders. There are three duties performed in Mina on the days of Eid ul Adha (The 10,11,12 and 13th of Dhulhijjah); the stoning of satan, the sacrifice of an animal and shaving.

The dictionary definition of ramy al-jimar means "the throwing of small stones," however, as a term related to hajj, it means casting a certain number of stones called "jamarat" at certain locations. Satan had tried to prevent Prophet Abraham from sacrificing his son, an order which Allah the Almighty had given to the prophet. Consequently, Prophet Ibrahim, his wife Hajar and son Ismail, realized the trap that Satan's was planning and cast stones on him. The ramy al-jimar symbolizes this event.

22. Are there any stops outside of Mecca during the hajj journey?

All of the locations for acts that are obligatory to be performed during hajj are in Mecca. However, some places of visitation in Medina, which work to increase the spiritual wealth of the journey, have also come to be considered stops in the performance of hajj. Here are the main locations of visitation situated in Medina:

The Prophet Muhammad said the following about the virtues of Masjid an-Nabawi:

"One prayer that is performed at this masjid of mine is equal to 1000 prayers performed at other masjids, with the exception of Masjid al-Haram." (Nasai, Masajid 4; II, 33.)

23. What is the ruling on visitation of the Prophet's grave?

"Whoever visits my grave, my intercession will be guaranteed for him." (Bayhaqi, Muhammad bin Hussain bin Ali, As-Sunan ul Kubra, V, 402.)

"Whoever performs Hajj and visits my grave following my death, will be as though he/she visited me during my lifetime." (Bayhaqi, V.,403)

These hadith and similar narrations are the sources of information which lead Islamic scholars to say that visiting the Prophet's grave is one of the most virtuous acts recommended by Islam. Furthermore, some Hanafi scholars have even stated that this visitation is a sunnah which verges on mandatory for those who have the ability and means to do so.

He Called and We Obeyed

The Sunna of Sacrificing

Hamza Yusuf on the Hajj of Community