I Left My Heart in Sarajevo From the Editor

I have dreamt of visiting Sarajevo since my childhood. I remember the crushing feeling of helplessness as I watched the Mostar Bridge collapse.  The grey pictures of war had been carved in my memory forever. Alhamdulillah, the war came to an end and there was encouraging news about people struggling to begin anew, working to rebuild their devastated country and start a new life. 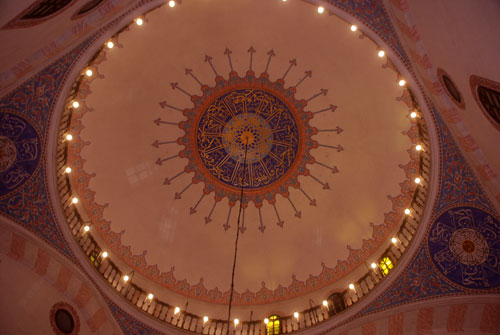 Two days ago I found myself at one of the oldest Ottoman mosques in Sarajevo, praying to Allah (swt) for forgiveness and blessings on the Laylat al-Qadr. Indeed, the Night of Power left all of us who were visiting this beautiful country speechless. Since beginning the 1400 Hatm Campaign to commemorate the fourteen centuries of the blessing of the Qur’an al Kareem, we on the lastprophet.info team had hoped to have a beautiful dua ceremony. Indeed, Allah (swt) granted us our wish!

More than half of the congregation in Sarajevo consisted of young people, people who were filled with both excitement and humility for the blessings of being a part of such a beautiful dua. It was cold outside, but nevertheless the courtyard was full of people listening and partaking in the dua with utmost respect. There were those who did not pray, but stood there motionless, taking part in the atmosphere. 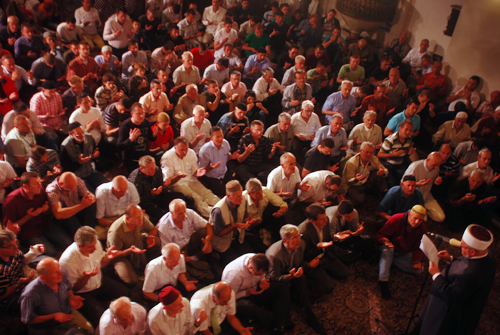 Just before and right after the prayers almost everyone stopped by the Meridyen booth that had been set up at the courtyard. Some were curious to know who we were and many were there to congratulate the team. Old people gave us big hugs. Everyone was smiling. The cameraman who helped us film the event refused to receive any payment, saying that being a part of this event was a blessing for him. We felt humbled.

As the lastprophet.info team we were there representing a group of dedicated Muslims who had set out to provide much needed information about the prophet of Islam (pbuh). Everyone congratulated us on the program and the work that we are carrying out, assuring us that we were indeed providing a service to the Ummah.

That night, the mountains of Sarajevo, which had been lit up by guns and bombs just fifteen years ago, were now covered in a comforting mist. As everyone went their own way we could still feel the tranquility that came with the night. We prayed that these mountains would never witness such hatred or animosity again.

And we all hoped that Allah Almighty would be pleased with us, and that this small event would mark the beginning of a new agenda for us, another step bringing the Muslim ummah together under the umbrella of duah and hatm campaigns…

Let’s see where our prayers will take us next year…

Born With a Pen: Expressing the Prophet through Islamic Calligraphy

The Love of Prophet Muhammad in Ottoman Society

I Left My Heart in Sarajevo