Jonathan Brown on Being Inspired by Prophet Muhammad Ahsen Utku 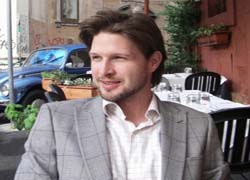 Can we start with the story of your conversion?

I was raised Anglican, the Church of England in America, but my family wasn't very religious. My family wasn't very religious, so I wasn't really brought up as a Christian. I believed in God; I have always believed in God. When I was in college, during my first year at Georgetown, I took a class in Islam and the teacher was a Muslim woman. I was very interested in what she was telling me. I realized that the things she was telling me were things that I had believed my whole life; the nature of God, the idea of reason, the idea that reason and religion are supposed to be compatible, religion should enhance your life, not make it difficult and not make you suffer. At the end of the semester I really felt like a Muslim; that summer, the summer of 1997, I spent reading a lot of books on Islam and traveling throughout Europe and Morocco; when I came back to school at the beginning of my sophomore year of college I became Muslim.

Did you have any prior contact with any Muslims before?

No, I don't think I had really met a Muslim before I took a class on Islam.

We all know your books on Prophet Muhammad and I have just learned that you are working on a new book.

Yes, there is a series of books from Oxford University Press called "Very Short Introductions"; they have them on everything; "Very Short Introduction to the European Union", etc. I am doing the one on the Prophet. I have finished the book. They will publish it as a book on its own and then as part of the series. Right now it is delayed, because they sent it to the Pakistan office of the Press, to see if it is offensive to Muslims. I wanted to tell them "I am a Muslim and everything in it is from Muslims. There is nothing in it that is offensive to Muslims." I talk about some of the Western historians and how they talk about the prophet, but this is just a discussion. All the things on the life of the prophet are from the Seerah and the hadith. 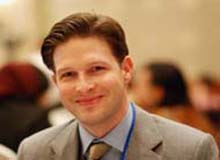 Why are they still worried?

Because books that are perceived to be offensive to the Prophet usually cause problems. But for a publisher these kinds of problems mean that people buy the book more. I don't know what they are concerned about.

What is the thing that influenced you the most about Prophet Muhammad?

Do you think that Muslims today can apply his teachings to their daily lives?

Definitely. I think that Muslims need to think about how he was both idealistic and effective. He had principles which he lived by, but he also knew how to market himself and the way to speak to a certain person to convince them; he knew how to speak to a person to make them his ally. He wasn't always just severe and strict and austere. He knew how to tailor his message to each person; not to change the message, but to shape it to the person, that is, not changing the content, but the form. This is very useful. I think when Muslims feel they are religious they tend to make announcements about what is haram. To really follow the example of the Prophet is to always think about what is right. That is really useful.

To have that balance...

Yes, to be a whole person, to be a fully-dimensioned person

So why do you think that in Europe and the US Prophet Muhammad has become such a target for some people?

First of all it is ignorance. People don't know anything about Islam or the Prophet. They hear that Muslims are terrorists and that Islam is a violent religion, so the Prophet must be the source or symbol of this. That is the biggest reason. A lot of it is political. The reason why there is conflict between Muslims and Western countries is because Western countries are invading or occupying Muslims countries. That causes political problems. Westerners depict Muslims as violent because the Muslims react against the invasions. There is a long history of conflict between Western countries and Muslim countries, but the kind of portrayal of the Prophet today, which such hatred and rancor, can only be explained as a product of political conflict.

Yes, I think it is. If you ask a person on the street about Islam, ask them to say a word that comes to mind, is it terrorism, Prophet Muhammad, extremism, swords, violence. Generations and generations of repeating this myth...

What should Muslims do?

Do their best to educate people. People don't know anything. If you tell the average person things about the Prophet's life, how he lived in Mecca for 13 years without fighting, without conflict with the Meccans who oppressed him, they would be surprised. I think in daily life, whether it is writing a book or writing on the internet you need to try to increase people's awareness of the Prophet.

You mentioned the difficulties faced in Europe, which are increasing every day, and the attitude of the media. What is the situation in the United States?

The rights of freedom of religion in the United States are very strong. You are constitutionally protected to practice your religion. It is very easy for Muslims to leave class or work to pray. You are constitutionally allowed to do so. If you want to wear your headscarf and your employer fires you, you can sue them for that. So it is easier because your rights are protected. However, because of the fears of terrorism many times the government will start investigations about Muslims for no real reason, deciding that a Muslim is a threat because they are practicing, or that they are a threat because they don't agree with foreign policy. Which is, by the way, the right of every American to disagree with foreign policy; many Americans disagree with foreign policy. But when a Muslim does: "this person is a potential radical". Of course after 9/11 the Patriot Act was passed, which allowed the government much freer rein in prosecuting people on the basis of national security. Wire tapping without permission or a warrant from the justice department, this was all allowed. There is a lot of torture of Muslim prisoners in Guantanamo Bay.

And recently it's been revealed that Information about Muslim students is being sent to the CIA...

These kinds of things happen a lot. This is a debate in the United States. There are many Americans who object to these policies, who aren't Muslims, because they are violations of constitutional rights. The government should not be able to tap your phone without getting permission from a judge. You should not be able to take student records. After the Patriot Act, if you go to a library to check out books, the government can come to the library and see what you are reading. The US can send Muslims to other countries to be tortured. Is water boarding torture...many Americans who are not Muslim object to this because they see it as being morally wrong, a violation of constitutional rights. This is a big debate. Muslims are against this, but so too are many Americans.

Do you personally see any problems as a scholar, a Muslim scholar?

Not really, I guess I am not a good example. My name is Jonathon Brown and I don't look like I'm from a Muslim country. I never face persecution due to my name or appearance. I have never faced a problem about being a Muslim scholar. People are generally interested in hearing what Muslims have to say.

What are you observations about Turkey as a Muslim country?

I like it very much. I understand that it is very difficult for Muslims here. But I love it because you can walk down the street and pray whenever you want to. The food is lovely. I wish I knew Turkish, I want to learn more. Religiously it is a very complicated country. I have a lot of respect for Turkish people. But it is a very complicated country.

What about the lack of unity in the Muslims world?

Yes, there is a great lack of unity. One of the problems is that people are interested in their own benefit and fail to form a unified group. They think that if they disagree with someone on an issue they can't work with them. "I won't be with them, I don't want to be in the same room with them...I don't want to cooperate with them..." But this is silly because you will never agree with someone a hundred per cent. You should always be looking for a chance to cooperate and to build partnership, not veering away.

Do you think that there should be one or two political powers who could lead these countries? For example, should countries get united under the framework of the Islamic Conference?

That would make sense. I think politically Muslims have shared issues that they care about, as well as life-style issues they care about, and I think they should be able to lobby as one group. For example if one country, like France, says women can't wear headscarves at university, the Muslim countries should boycott or make a statement. As an American I can't agree with this, I don't think any American would agree that someone should not be allowed to practice their religion freely; if you want to wear religious clothing this is your right. I think that is one thing they can do and another thing is to have more of an impact politically in terms of foreign policy; for example if a country wants to invade  a Muslim country no Muslim country will support that; they won't let them use their air space or ground space.

Yes, instead of making commercial or military agreements with them...

By the way it would be better for America. Most Americans now would tell you that invading Iraq was a bad idea and if Muslims countries had made it difficult for America to invade Iraq by refusing cooperation or approval then it would have saved us a lot of problems, billions of dollars and many lives. When someone gives you nasihat and tells you not to do something, it is good for you too.

I aspire to be very knowledgeable in deen Like you Sir. I pray that Allah will use you to guide those unguided people.

I aspire to be very knowledgeable in deen Like you Sir. I pray that Allah will use you to guide those unguided people.

We Are Here For Peace of Mind

Lings' The Life of Prophet Muhammad Audiobook in Turkish

"Living Islam in the 21st Century" in Istanbul, Turkey