Miracle of Sound at the Ka'ba Daniel Abdal-Hayy Moore 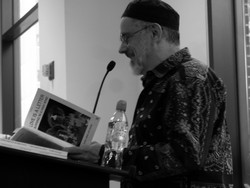 Miracle of Sound at the Ka'ba

What sounds are heard around God's House?


A silence that sits deep under the Throne of God -

all other silence surrounds it and


Every other silence partakes of that silence. Silence in

womb, the silence of death.


The Ka'ba sits in the

shaft of that silence from the height of heaven,


Then, just around this great circle of silence

the sound of an ocean, not of water or salt,

but of human longing, aswirl with

surf, suspended animation of all

tremendous sounds in creation, the

exhalation of giant beasts, outbreath of

earth as God created caves and

articulating what shines through both


the Word of God,

that aural text that floats from the

Heart of Light into the hearts of mankind,

tongue-tripped into articulate words, formed and


light to the eyes and

sweet relief to the heart.


Then out from that circle,

the sound of all human speech, words of

God's Compassion sprinkled throughout it,

silence above all, and the

echo of that silence.

Then a phrase of Urdu, Pashtu, Malay,

clatter from far away, the

rhythmic supplications of a group of pilgrims

Then the click sound of a microphone in sonic superspace

Then words enveloped by the Word,


the Word enveloped in a roar,


the roar enveloped in silence,


the articulate silence of God, then


the silence of silence.


Then the echo of that silence.


Then the looking around.

Daniel Abdal-Hayy Moore is a Muslim poet who has published many poetry books and organized poetry reading festivals. Born in 1940 in Oakland, California his first book of poems was published in 1964. He became a Muslim in 1970 and travelled extensively around Europe and North Africa. Although he stopped writing for ten years he continues writing Islamic and spiritual poetry.

Sallams, MAhallah quite nice a poetry.. inshallah if possible to visit UAE/Sharjah and bless us with your poetry and ur wisdom...
& hope to see you during Sharjah International Book Fair.. 2013...
take care Have peaceful pleasant timer
regards
azim.musafirs

Audio English Translation of the Qur'an

The Miracle Of Pain

Miracle of Sound at the Ka'ba