Over-consumption and the New Ummah 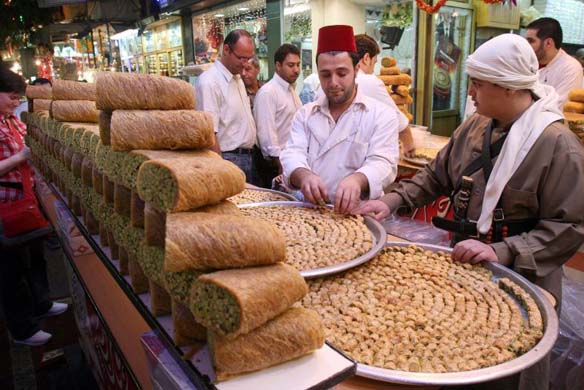 The hubbub of the city during the week preceding the month of Ramadan never ceases to leave butterflies in one’s stomach as the anticipation nears of an entire month of abstaining from food and drink, back-biting and cynicism, intercourse, cigarettes and anything pertaining to the animal desires, from dawn until dusk. Somewhat resembling a western city getting ready for Christmas, lights go up and banners are hung from building to building along the narrow streets of Islamic Cairo. Special Ramadan lanterns, colorful fabrics, confetti and song coalesce a renewed sense of Islamic pride. Ironically, this sense of pride is not exemplified by prayer, introspection and self-discipline to the extent that it should be, according to the Sunnah of the Prophet Muhammad (pbuh).
Ramadan around the world, and particularly in Egypt, is at great risk of losing its stance as a religious rite, and becoming another "consumer holiday", which for many Egyptians, already seems to be the case. According to a study conducted by ’s National Centre for Social and Criminal Research (NCSCR), 83 percent of Egyptian families increase their consumption this month between 50 and 100 percent, the majority of which is spent on meat and poultry, sweets, dried fruits and nuts, imported from  and . Thousands of US dollars are spent on Iftar and Sahur banquets, organized by affluent Egyptians, to provide free fast-breaking and pre-fast meals for the poor, yet due to the excess amount of spending on lighting, décor and “VIP sections,” the obligatory zakat and fitr (almsgiving) has diminished significantly, much to the dismay of the less fortunate, who find themselves in distress within these circumstances.

An even more astonishing fact, which the study goes on to mention, is that at least 60 percent of food on the average Egyptian table goes to waste at this time of year, a percentage that displays immense contradiction during a time of pious spiritual reflection.

If the Muslims of today were truly serious in their devotion to a religion that prohibits wastefulness and over-consumption, whose Prophet constantly stated that a meal for two is enough to feed four, and a meal for four is enough to feed eight, we would be in a much better state, health-wise and financially. 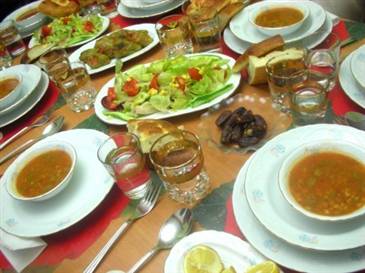 Unfortunately, the month of Ramadan witnesses an increase in cases of diabetes, cardiovascular diseases, and other health-related problems, like indigestion, gastritis and colitis – hence, another chunk of money spent towards health care, which could have been redirected for a better and less self-inflicting cause.

The key to an Islamic lifestyle is moderation, yet the modern-day Ummah, suffering long-term memory loss, remains ignorant of this concept. We forget that eating is also a form of ibadah (worship). We perform ablution before meals and say bismillah (in the name of God) before our very first bite. Yet, following this prelude and Islamic form of “Grace,” we still have the audacity to crowd our tables with delicacies and “special dishes,” which many of us cannot even afford, let alone finish, and indulge until our stomachs burst.

Prophet Muhammad would break his fast with a few fresh dates, if they were readily available, otherwise dry dates, and a few sips of water. Never would he demand anything extraordinary, though occasionally he would enjoy the delicacies of his time, like meat mixed with bread and certain sweets. Yet here we are calling ourselves the progeny of the Prophet who once said: “No human ever filled a container more evil than his belly. The few morsels needed to support his being shall suffice the son of Adam. But if there is no recourse then one third for his food, one third for his drink and one third for his breath.” ما ملأ ابن آدم وعاء شراً من بطن، بحسب ابن آدم لقيمات يقمن صلبه، فإن كان لا محالة، فثلث لطعامه، وثلث لشرابه وثلث لِنَفَسِه (Al Tirmidhi and Ahmad).

Islam, although a religion for all of humanity, was first revealed to a desert people, who intuitively had a keen sense of nature's delicate balance and understood the need for conservation and preservation. The Qur’an repeatedly makes reference to water and other natural resources, which solidified this view of nature.

Even the ancient Egyptians were utterly aware of the fragility of nature, making sure not to disrupt its equilibrium, while at the same time using and preserving its resources as the temporary domain that it is. Their advanced methods of irrigation through anticipating the annual flood of the are enough to prove their profound awareness and interconnectedness with nature and nature’s higher being.

Not only were Muslims heirs to the teachings concerning agriculture and irrigation of all earlier civilizations of Western Asia and the , but they also became experts themselves. Agriculture formed the economic groundwork for which they were then able to devote their time to the arts and sciences. Many hadiths encourage the practice of agriculture, with particular reference to one, in which the Prophet Muhammad (pbuh) states the blessings in planting a tree, even if it is the only one before the end of the world. 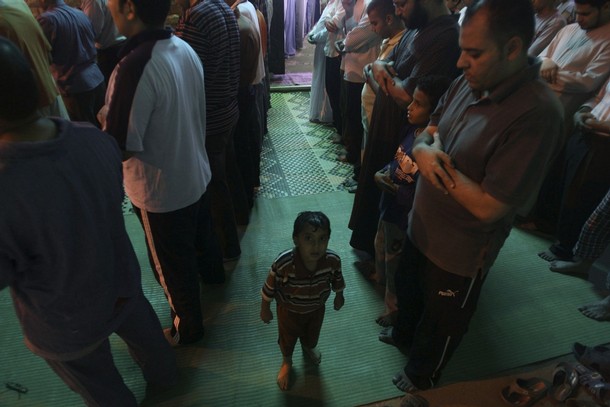 With all of this history behind us, our dwindling ummah, need not only to devote more of their time to worship and reflection, but initiate a serious study into Islam’s great past, rather than remaining slaves to the television set, which is reflected in the even higher media consumption throughout the holy month with the rallies of soap operas that are programmed to heighten entertainment while people fast and indulge after sunset.

Today's ummah is in dire need of taqwa.

Ramadan: The Celebration of Revelation

The School of Ramadan

Keeping Away From the Haraam is not Sufficient