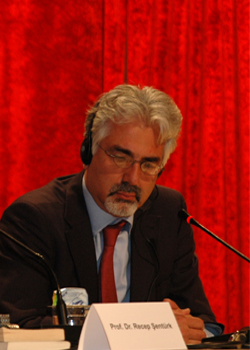 The meeting with the Turkish scholars was very interesting from many points of view. A group of Muslim intellectuals debating about Prophet Muhammad and the image of Islam in the West is something special today. We all know the problems cartoons about the Prophet which were published on September 30 2005 in the Danish newspaper Jyllands-Posten; a  few days ago they were reprinted in the Norwegian Protestant magazine Magazinet. And we know about the need to do something to prevent such attacks against Islam in the future. But 10 years after the cartoon controversy, very few initiatives have been promoted by the European Muslim community and we can say that the situation in the EU is even worse than before.

The discussion with Turkish brothers have been stimulating and were a good experience to clarify how it is possible to have a synergy between Muslim brothers in Turkey and in the Islamic world, on the one side, and the European Islamic community on the other.

There are four main topics to be developed in the future.

1.   The mass media. The cartoon controversy was mainly a mass media campaign against Islam. In this field the Islamic community suffers from a lack of means. There are no Islamic press agencies, either at the local or the EU level. There is no coordination between national communities. In Italy, as the Association of Muslim Italian Intellectuals, we opened a press agency to improve the image of Islam for a year; we have had very interesting results. But the lack of funds has forced us to limit such initiatives. There are many Islamic web sites, but without a media campaign their influence has been restricted to a small part of the Islamic community.

2.   Politicians. Islamophobia is widespread amongst European politicians because it is very useful to win political approval. Islamophobia is related to xenophobia. It is paradoxical that the "old" European Countries need immigrants as this is the only way they can compete socially and economically, but at the same time the political discourse is so hostile towards immigration. There should be encouragement to start a media campaign about the benefits of immigration.

3.   Mosques and Islamic centers. Until now Islamic centers in Europe have operated mainly as national community centers. Few of them are able to fulfill the cultural need of the umma or to establish dialogue with European cultural institutions. It is of strategic importance that a network is established between mosques in the main cities and the capitals. A harmony between Islamic states and national Islamic organizations is still to be established. It is to be hoped that Turkey can play a major role among Islamic countries which traditionally support European Islam, first of all Saudi Arabia.

4.   Interreligious level. Europeans don't know about Islam and don't recognize Muhammad as a prophet. This is also due to the lack strong action at an interreligious level. Very few Christians and Jews officially recognize the prophecy of Muhammad. Among Christians the only statements in favor of Muhammad came from the Patriarchate in Istanbul. In the last decades, the dialogue has mainly been in the hands of the Catholic Church of Rome. The encyclical Dominus Jesus of 2000 is a real obstacle to dialogue. Intense cultural and philosophical activity about the meaning of prophecy is to be hoped for. I was part of the Islamic delegation that took part in the First Islamic Catholic Forum in November 2008. I tried to create an Islamic delegation in Rome that would meet periodically in order to overcome the division in many of the delegations from the Islamic states which were involved in the dialogue. And they are several. An Islamic coordination centre for dialogue, preferably in Rome, is to be hoped for.

5.   University: The level of study of Islam in European universities differs greatly from place to place. Chairs in Islamic religion are very few. There are also only two or three Islamic publishers at the university level in Europe. It to be hoped that a translation centre from Turkish and Arabic into European languages can be established at the university level. It will be very important for the future if courses for imams could be opened, like the one organized by the Great Mosque in Paris. They should be a bridge between the life of the Islamic community and the universities.

I have been greatly impressed by the efficiency of the Meridyen organization, by the kindness of the people involved in the meeting, and by the stature of all the scholars and representatives I have met during these days. I truly hope that Turkey will become more involved in European Muslim life. The presence of the Vatican makes Rome a central place for discussing the Islamic religion, with immediate repercussions on the rest of the world. I know that there are not many Turkish immigrants in Italy. Less than 20,000 in the country and less than 1,000 in Rome. But this may also be an advantage. The Turks are not perceived as immigrants or strangers, thus  the presence of Turks are not perceived as a threat. The opportunity to have such an important and open-minded scholar as Kenan Gürsoy as the ambassador to the Vatican in Rome is really a mercy from Allah.

Ahmed Gianpiero Vincenzo was born in Naples in 1961 and became a Muslim in 1990 after a journey of long and in-depth religious research. Vincenzo, who is considered to be a leading representative of Italian Muslims, lives in Milan and is one of the founders of theIntellettuali Musulmani Italiani (Italian Muslim Intellectuals). Vincenzo teaches History and Law of the Islamic civilisation” and “Religious Laws”.University at the University of Naples. In 2007 he became professor of “Aesthestic of Eastern Religions” in the Accademia di Belle Arti  (Fine Art Academy) of Catania

The Prophet and the Education of Children

Women Retake Islam: The Prophet -- And My Mother -- Would Be Proud