Signs of Beauty (Nihavend No.34)

The ilahi (nasheed) 'Signs of Beauty' - translated into English from the Turkish original by Abdal Hakim Murad - is sung by poet and songwriter Dawud Wharnsby Ali.

The original was written by famous Turkish Sufi Aziz Mahmut Hüdayi* (d. 1628), known in Turkey as the 'Sultan of Hearts'. 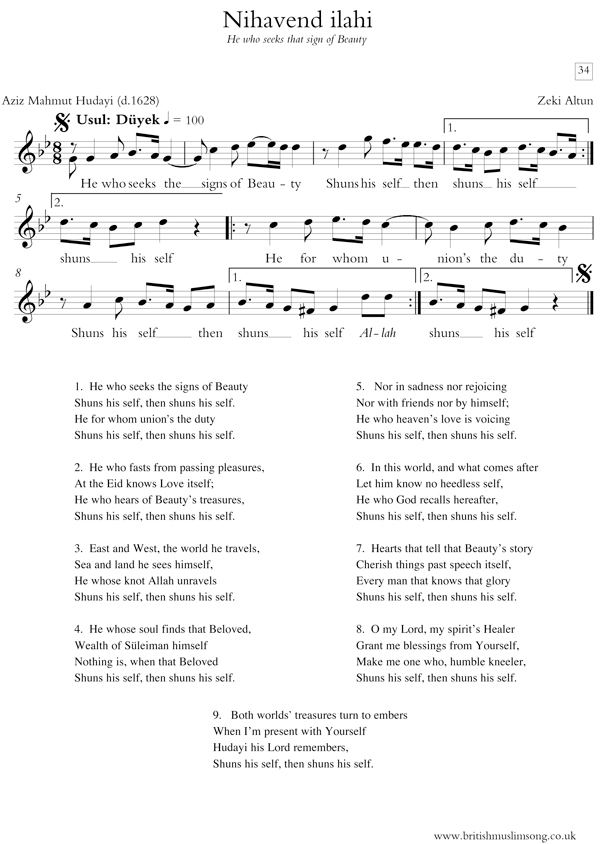 *Who is Aziz Mahmut Hüdayi?

Born in 1541 in Çorum's Koçhisar village, Aziz Mahmut, a Turkish patron saint from Anatolia, spent his childhood in the Sivrihisar village of Aksaray. He is a descendant of Junayd-i Baghdadi -- dubbed "The Master of all Sufis" -- and thus a sayyid -- a title given to male descendants of the Prophet Mohammed through his grandson Husayn, the son of Ali. His real name is Mahmut. Aziz Mahmut was the founder of the Jelveti Sufi order, which bears some resemblances with the Khalwati order since the orders are so close to each other through the lineage of the Sufi masters. Aziz Mahmut was the spiritual mentor of Sultan Ahmet I. According to some accounts, the people of İstanbul flocked to the streets on the day he died in 1628. He has been a renowned Sufi amongst the spiritual guides with his divan -- his collection of poems -- as well as his talks. As he was endowed with the sciences of both the inward and outward worlds, he was a guide to sultans during his lifetime and a shelter for all those in need of guidance in both worldly and spiritual matters. Before becoming a beloved spiritual guide, Aziz Mahmut was the supreme religious judge (qadi) of Bursa and was called Qadi Mahmut Efendi. He then became a disciple of Sheikh Muhammad Üftade after settling a matter in his court that utterly puzzled him spiritually, forcing him to question his outward knowledge. Due to a series of events that followed this questioning process, he renounced his rank and started selling livers hanging from a stick while wearing his qadi robe and turban to tame his ego. His sheikh then gave him the titles aziz (dear, beloved) and hüdayi (one who guides people into the straight path). He educated many disciples at his lodge in Üsküdar until his passing in 1628.

It is "Tecelli cemal ister" in Turkish.

What is the name of original Turkish song?

Quicunque Vult: or, My Journey to Islam - II

Quicunque Vult: or, My Journey to Islam - I

Quicunque Vult: or, My Journey to Islam - III