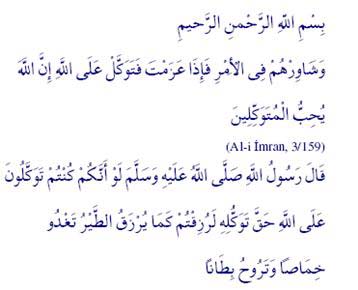 Lastprophet.info provides its readers with a weekly Friday sermon (khutbah), which may act as a supplemental guide for imams, hospital and prison chaiplains, Muslim organizations and societies (i.e. MSA), students and the general reader. All of our sermons have been prepared by imams, Islamic scholars and theologians in the Republic of Turkey. Please contact us if you would like to contribute or request a topic for a forthcoming sermon.

Our Creator says in the Holy Qur’an, “For, Believers are those who, when Allah is mentioned, feel a tremor in their hearts, and when they hear His signs rehearsed, find their faith strengthened, and put (all) their trust in their Lord”[1] -- noting that one of the important characteristics of a Muslim is that of resignation, or rather, that they place their trust in Allah.

Tawakkul (Reliance) is “seeking refuge in and trusting Allah -- after taking all precautions.” In other words, tawakkul is, “Obeying Allah after there is nothing else left to do following the fulfillment of all material requirements for meeting one’s goal, thus leaving the rest to Allah.”[2]

Upon one of the companions of the Prophet saying, “Oh Messenger of Allah! I release my camel into the desert and then I put my trust in Allah,” the Prophet said, “Tie your camel, and then put your trust in Allah…”[3] This indicates that tawakkul without precaution is not permissible.

A great example of tawakkul and precaution is our Prophet’s heading toward Mount Sawr, and after hiding there for a time, heading toward Medina, during his pilgrimage from Mecca to Medina. And when the Prophet took scurrying steps while walking before a building on the verge of collapse, the companions asked, “Are you running way from the fate of Allah?”[4] To which he responded, “My running away from fate is part of Allah’s fate as well” – this should serve as a model for us.

It is darkness for human beings to blame the suffering and disasters one undergoes on fate and destiny without taking into consideration their own faults and oversight. For example, earthquakes certainly happen with the knowledge of Allah. However, it is never right for us to leave our wellbeing and safety in the hands of Allah and shuffle off our responsibility by saying, “This is what Allah has willed; it’s fate.” What falls upon our shoulders is to take the necessary precautions by using our intellect and skills. To think that no matter what, the course of events would have played out as they did and to stop taking precautions in light of this is not an Islamic understanding. This is only an evasion of responsibility and an inability to face the unfortunate consequences of our own shortcomings. To this end, there is no difference between the pious and non-pious, between the sinner and the pure person. For the rules of creation are the same for everyone. One who follows them will lead a comfortable life, and the one who does not will have to deal with the consequences. And what is left to be done after all precautions have been taken and we are faced with a calamity, is to exercise patience and countenance.

I would like to conclude my khutbah with a verse from the Holy Qur’an and a hadith. Allah the Almighty says, “…and consult them in affairs (of moment). Then, when thou hast taken a decision, put thy trust in Allah. For Allah loves those who put their trust (in Him).”[5]
And our Prophet said, “If you put your trust in Allah as you should, then Allah will provide you with subsistence, just as he does for the birds who leave their nests hungry and return full.”[6]

The Provincial Khutbah Commission of Turkey

Friday Sermon - The Importance of Quranic Learning in Childhood Education

Friday Sermon: Respect for the Prophets