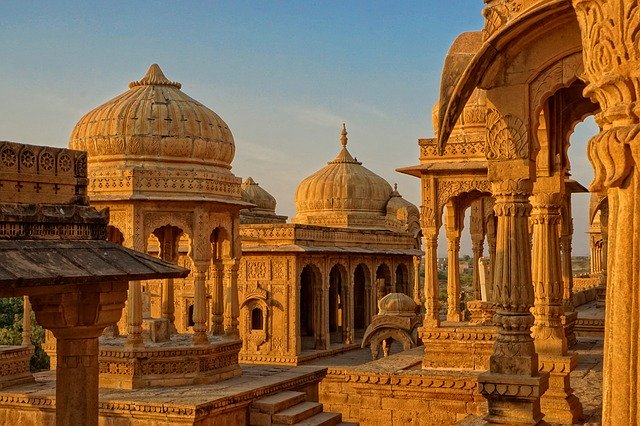 Demonising the Muslim rulers of old India has been the driving force of the country’s rightwing Hindu nationalist ideology, but history is witness to the immense contributions Muslims have made to protect and encourage Hinduism in the subcontinent.

As India battles the rise of Hindu nationalism, primarily led by Prime Minister Narenda Modi, the legacy of its Muslim rulers have also come under attack. The ruling Bharatiya Janata Party (BJP) has taken to removing the names and contributions of Muslim kings from school textbooks, roads and landmarks.

Hindu nationalist groups, like the BJP and its ideological mentor Rashtriya Swayamsevak Sangh (RSS), despise the Mughal Empire and its Muslim predecessors, perceiving them as invasive forces that 'occupied' what were once a cluster of princely states, now known as India, for several centuries. The ruling BJP has almost always peddled and milked that distorted narrative for political gains.

In order to use it as an advantageous political tool, Hindu fanatics and rightwing organisations have successfully pushed a doctrine among Hindus that Muslims rulers were temple destroyers.

A deeper look into pre-colonial India, however, reveals that Muslim rulers had in fact historically built several places of worship for Hindus. They not only contributed to the construction of India's significant Hindu temples, but also oversaw the maintenance of Hindu pilgrimage centres such as Ayodhya, Mathura and Vrindavan.

Abul Fath Jalal-ud-din Muhammad Akbar, also known as Akbar the Great, the third emperor of the Mughal Empire, earned a reputation for being a just ruler of 16th-century India. Emperor Akbar enlarged and consolidated grants to temples and temple-servants in the Mathura region by his farmaans (orders), dated 27 August 1598 and 11th September 1598, in Vrindavan, Mathura and their environs.

His son Jahangir continued the tradition of supporting a multi-faith India by making significant additions to the grants approved by his father. He added at least two temples to the list of the thirty-five supported by Akbar’s grant of 1598.

Similarly, another Mughal King, Jahangir, provided 121 bighas, or 30 hectares of land, to 5 families of temple sevaks (caretakers). In 1620, he also visited the Vrindavan temple. According to historic accounts, it is also known that whenever temple priests had any problems, they approached Mughal rulers or their senior officials. In most cases, the Mughal authorities took timely action to address any issues.

The Nawabs of Oudh, who governed the state of Awadh, anglicised as Oudh in north India during the 18th and 19th centuries, gave several grants to the temples of Ayodhya and provided them protection in other ways.

Nawab Safdarjung built several temples in Ayodhya and contributed to repair works of other temples.

His successor, Shuja-ud-Daula, gifted over 20 hectares of land for the construction of Hanumangarhi, one of the most important Hindu temples. According to Mahant Gyan Das, the head priest of Hanumangarhi, the temple was built in 1774 after a Hindu priest visited an ailing Shuja-ud-Daula and helped him recover from a spell of illness.

As per the documents available at the famous temples in Chitrakut, Varanasi, Ujjain, Allahabad and other locations, the grants were made by Muslim rulers to provide support.

Aurangzeb: a tyrant or a just ruler?

Mughal King Aurangzeb, who has been smeared by India's rightwing parties for persecuting Hindus - this includes the ruling BJP - also protected Hindu temples, according to American historian Audrey Truschke, who has extensively written about Mughal-era India.

According to Indian historian, Pradeep Kesherwani, Aurangzeb gave "lavish grants" for the construction of a Someshwar Mahadev temple on the banks of Sangam in Arail .

Akbar the Great, who earned accolades for encouraging a brotherhood between the Hindu and Muslim communities of India, translated Hindi literature and also participated in Hindu festivals in Fatehpur Sikri, which was designed in Persian style. Akbar built a temple there and hosted scholars from various religions frequently including Hindus, Christians, Zoroastrians as well as Muslims. Akbar also allowed the Jesuits to build a church in Agra and started a translations department to get Ramayana, the Mahabharata and the Bible translated into the Persian language.

When it comes to the Deccan kingdoms, the 16th century King, Adil Shah, also established a  grand library and appointed a Sanskrit scholar, Vaman Pandit, as its head. A skilful administrator, artist, poet and a generous patron of the arts, Adil Shah paid his respects to Saraswati, the Hindu Goddess of learning, in his songs. He built a small shrine near his palace in Bijapur and placed the paduka (footwear) belonging to the goddess there.

In the 15th century, in India's neighbouring kingdom Kashmir, King Zain-ul-Abidin constructed temples, participated in Hindu festivals and sent messengers to call Hindus who had left the region.

Zain-ul-Abidin was a scholar of Sanskrit and he played an important role in translating parts of the Upnishads into Persian.

Also in Bengal, Pathan Kings, such as Sultan Nazir Shah and Sultan Hussain Shah, followed similar policies and arranged for the translation of Mahabharata and Bhagwat Puran into Bengali.