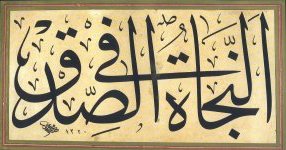 After Prophet Muhammad became an active member of the society where he passed his childhood, he began to be uncertain about everything in the society. These doubts prevented him from accepting all the customs and behavior in that society which had been passed down from generation to generation and applying them in his own life. In this situation Muhammad adopted an attitude of organizing his life according to the truths he had discovered through common sense and intuition and to develop relationships with others along these same lines. This action and behavior of his were the first propagation of Islam not officially based on revelation.

The behavior Muhammad displayed in front of everyone brought new dimensions to such concepts as “life, man, freedom, rights, justice, equality, truthfulness and work.” It inspired new ideas in their minds regarding how some other similar concepts could, in fact, should be understood.

Muhammad joined society as one of its members. However, the people in society at that time were extremely determined to adhere to the patterns of behavior they had inherited from their fathers and grandfathers and to share and live their values. They had an uncompromising stance on the transmission of these to their children.

In spite of all this, the people used the attribute “amin” for Muhammad, who did not accept their actions and behavior, did not share their values, and, to the contrary, suggested new values; they called him “Muhammadul-Amin.”

Muhammad was an orphan. He had no authority behind him. But still the society called him “Amin.”

The wealthy thought of this term in respect to trade. They understood that Muhammad was extremely trustworthy in trade and other financial relationships. For this reason, they called him “Amin.”

The nobility were concerned about their honor and dignity. They understood from this term that Muhammad would respect their honor, dignity, and prestige. By using “Amin” they wanted to show that he would not damage their honor by means of lying, slander, falsehood and gossip.

Those in governing positions in society –from the nobility, of course- gave this term a different meaning. They saw his existence as a guarantee against friction among classes and conflict among tribes. With this term, they wanted to show that they did not nurture doubts about his role as mediator and judge in society and his positive attitude regarding events.

Fighters and warriors naturally gave a different meaning and interpretation to this term. With this name, they understood that Muhammad was reliable in battle and that he would not abandon the battle lines under any circumstances that might appear.  They wanted to demonstrate this to everyone –friends and foes alike.

The socially, economically and physically weak gave a meaning to this term appropriate to themselves. They gave it dimensions according to their own state and conditions. They wanted to show that they had no doubt about his ability to help them in every possible way when they came to him for financial aid and other needs and, in fact, that they believed he would ask for help from friends and serve as guarantor for it. The poor looked at this name from their own perspective of helplessness. These people wanted to demonstrate with the term “Amin” that they believed and felt certain when they encountered oppression, regardless of from whom, that Muhammad would protect their rights under all circumstances. Orphans wanted to make clear that when they sought his protection, they were sure he would open his arms to them as a brother or father and that they would live without fear because of him. In a world where everyone beat, cursed and looked down upon them, slaves understood by this name that he would not beat, curse, look down upon or speak badly to them. They wanted to explain their belief that in a society where no one considered them as human beings, he saw each of them as an honorable person and would treat them accordingly.

Rightly so, these people could only have been expected to describe someone as “Amin” who had a lifestyle like their fathers and grandfathers and themselves and who drank alcohol, gambled, made prostitution, told lies, made slander, spent their time plundering, worshipped idols, and unconditionally accepted and shared other values with society. Their contravening these expectations unites all our views and interpretations on one point. Actually, these people did not outwardly doubt what they did and their values. However, the fact that they described someone like Muhammad as “Amin,” someone who did not live like them, who had a different lifestyle, and who brought different values to society is important in respect to showing the “sub-conscious” doubts, suspicions and uncertainty about their actions, behavior and the values they shared up to that time.

The path followed and method adopted by Islamic civilization from the time of the first revelation always had the goal of helping to bring to the surface the existing doubts and uncertainties these people had in regard to the things they did and the values they developed. The point sought on this road adopted by Islamic civilization was to help the “idea of truth,” which nourished the sub-conscious doubts and suspicions about the actions and behavior of these people, become conscious. It gave the people a chance to rescue themselves from the old, mistaken conditioning the society had engraved in them.

In the period before Islam, the fact that these people called Muhammad “Amin” even though he did not live like them and brought different values from their own shows two perspectives and, consequently, leads us to two important points:

Prophet Muhammad as a Human and a Prophet

The Source of Religion