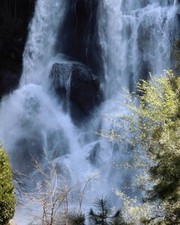 Environment is a broad concept that includes all elements necessary for life. As a term it can be described as "everything affecting human beings and everything affected by them" or "the sum of all conditions and factors affecting the life and development of an organism."

There is guidance in both the Quran and the Prophet's sunnah regarding what needs to be done to protect the environment and precautions to be taken against things that will destroy the balance of the ecological system that exists in all life and things that will harm natural environmental elements like the air, water and earth which are necessary for man, animals and plants to live healthily.

The Prophet Muhammad (pbuh) admonished against people being killed unjustly even in wars; the harming of unarmed women, children and the elderly and people performing worship; unnecessary damage to the natural environment; the killing of animals; the cutting down of fruit trees; and the burning of crops, in particular.

The Prophet gave the necessary importance to cleanliness in the environment and he stated that it should with body cleanliness; that houses, streets, and public places like mosques should be kept clean; that water sources should not be polluted; that not only people, but animals should not be bothered by pollution and, for this reason, that humans should not use animal nests or holes as toilets.

In addition, the Prophet also recommended and warned that shaded spots where people could rest as they came and went and spaces under fruit trees should not be dirtied and there should be no spitting on roads (Buhari, Salat 33-35); and objects that could injure people should be removed the roads and put to one side (Muslim, Birr 131,132). All these are important in respect to a healthy environment and in respect to protecting and keeping the environment clean.

Another environmental factor important to human life and ecological balance is the presence of green areas within, close to and outside of settlement areas. On this subject the Prophet's own applications, along with his commands and recommendations, are full of guidance. As a matter of fact, the Prophet said, "If someone plants a tree, he will receive merit as long as the tree bears fruit" (Ahmed b. Hanbel, Musned V/415).

Animals are also an important element of the environment. The Prophet's attitude, behavior and recommendations on the subject of animals are striking. We can find necessary information in the Prophet's sunnah on such topics as being kind to animals, not loading them down with more than they can carry, using them for work that is suitable to their nature, and not tormenting or torturing them. In addition, according to the sunnah, only wild animals that pose a threat to a person can be killed.

In addition, there is the matter of waste of resources due to uncontrolled production and consumption. In respect to this it is possible to say: If you want to see the cultural level of a nation or society, it is sufficient to look at their public areas.

The Finale: The Life of Muhammad, Episode 3