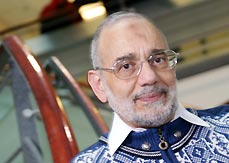 Jamal A. Badawi is an Egyptian born Muslim Canadian and former professor in the Sobey School of Business,Saint Mary's University in Halifax,Nova Scotia. He is a well-known author, activist, preacher and speaker on Islam and Muslims. He completed his undergraduate studies in Cairo, Egypt and his Master's and PhD degrees at Indiana University in Bloomington, In.

Dr. Badawi has authored several books and articles on Islam. He also researched, designed and presented a 352-segment television series on Islam, aired in Canada, the US and other countries. Audio and video copies of this series are widely available.

In addition to his participation in lectures, seminars and interfaith dialogues in North America, Dr. Badawi was invited as a guest speaker in various functions throughout the world. He is also active in several Islamic organizations, including the Islamic Society of North America, and is the founder/chairman of the Islamic Information Foundation, a non-profit foundation seeking to promote a better understanding of Islam and Muslims towards non-Muslims. He has lectured extensively in North America and abroad, and is an excellent speaker on a variety of topics including Islam and Christianity. He is an expert in Christian-Muslim dialogues. Dr. Badawi is also a member of the Islamic Society of North America (ISNA) Fiqh Council and a Guest Scholar at The American Learning Institute for Muslims.

Dr. Badawi answered the questions of Lastprophet.info about the situation of the Muslims in the West and the future of Islamophobia.

You are right, on the whole, Muslims in America on average are more educated, and economically speaking are better off. But on the whole, of course when the Fatwa council addresses the issues faced by them, it relates to various groups of Muslims irrespective of their economic status.

But do you think it affects how people perceive Islam?

In one sense yes. In North America the media is playing a very significant role in distorting the image of Islam and Muslims. So while Muslims are educated, and some people perceive them as such, Islamophobia in America is sometimes even more so than in Europe because of the intensity of the Islamophobic feelings.

What do you think is the best approach Muslims can take in the West against Islamophobia?

Well, I always recommend that the first thing to start with is to put our trust in Allah (swa) and never feel discouraged, because this is the path of the Prophets, and the path of all of those who follow the paths of the Prophets. There will always be enemies. Even the greatest of the Prophets of Allah have faced much greater opposition than what Muslims are facing today. So number one; never despair, after all, upon the authority of both the Qur'an and several hadith, if Muslims abide by Islam, no matter how much they suffer, they will insha'Allah be victorious in the end. Number two; is to be a good example, Islam cannot communicate with others through lectures or books even though they are important, but by the example that Muslims set themselves. Thirdly; by Muslims also adopting the wasati, which I translate as not really moderate, but a justly balanced approach to Islam, obviously there would be a better image communicated to others. And fourthly; and I give lots of lectures on that topic in particular to understand the nature of the citizenship of Muslims in a minority, and the civic engagement, and all the affairs of society. We are not doing that to show off, but actually it has its deep theological basis in our faith. After all, Muslims have always lived as minorities throughout the centuries, and almost a third of all Muslims today are living in a minority situation. So by positive integration, without neither isolation nor assimilation, Muslims can really give a good image of what Islam is all about. And of course finally we can say that normally, Muslims would have to engage in the media, and correct the distorted picture given about Islam through the variety of means.

It seems that, for example in the library of Yale University, there isn't an Islamic encyclopedia that is approved by Muslims. They have the German Islamic encyclopedia, and it seems that the disinformation is one of the reasons why people do not know Islam, or they have a wrong image of Islam. So is there any work going on within these councils that are trying to bring out?

I remember in a dialogue with a Christian leader, he himself was speaking about this issue, and he said that until the fifties, and we were talking about the late fifties, if I remember rightly it was something like ninety percent of all the books in Western languages about Islam, had been written by non-Muslims. Well some of course could be good, fair writers, but there are also a lot of misgivings, and a lot of misunderstandings that are found. Well, you are right, we need to fill that gap. There have been several books that have been translated, and the European Council of course has produced already a number of books on Fatwas, and there are also those in German that have been printed regularly of course. But unfortunately it is still exclusively in Arabic, and maybe some translations in the future insha'Allah will enrich the library. There have also been translations of hadith as you know.

But there's a serios problem about a proper hadith database in English...

You are right, and even some of the translations available need to be reviewed very carefully. For example, there are translations of Bukhari with some errors that need to be corrected. You see, this requires lots of resources, and lots of concerted, coordinated activity rather than everyone just doing their own. If you compare that with what is happening in the Christian community, where sometimes you get dozens of scholars sitting together to translate certain things like the Bible for example, which has been traditionally very intensive and extensive kind of work. And insha'Allah, I hope with greater unity, and coordination among Muslims rather than doing things only for reputation, it is really our purpose to serve the cause of Allah, then we need to coordinate and work together. In this way you get greater resources, you get better verification and cooperation among scholars.

And what do you think is the best way to react to, for example, the cartoon controversy, or the recent South Park controversy?

The Islamic world has, and insha'Allah will continue to have the ultimate role model, for all Muslims and for the world at large in the Prophet Muhammad (pbuh). And that underlines the great importance of a careful, an analytical study of the Seerah, not just as with any history book, but also to stop always and reflect.

Do you think that the Islamic world today needs a leading actor or maybe a role model?

The Islamic world has, and insha'Allah will continue to have the ultimate role model, for all Muslims and for the world at large in the Prophet Muhammad (pbuh). And that underlines the great importance of a careful, an analytical study of the Seerah, not just as with any history book, but also to stop always and reflect. Allah says in the Qur'an (recitation of the Qur'an), the role model, and the example. This is the ultimate, Allah chose him perhaps as the most perfect human being, as perfect as any human being can reach. But there are also derived models, those who had been influenced by the personality of the Prophet, and he had defined a whole, a ray of role models from the companions, from the Taba'in, and also throughout Muslim history those who were engaged in giving examples in scholarship, in charitable work, in defending Islam and carrying its message to the rest of the world. Unfortunately in the Muslim world today, a lot of the Muslims have not been privileged with the greater knowledge and commitment of Islam, and we hope insha'Allah that this will improve. I think we really need to put our priorities right, and that will come with more and more understanding of Islam. If people are just lost, and have no clear sense of the purpose of life, that is where we start looking at this or that, and forget our history, forget our real heroes and replace them with the kind of pop culture that is emerging everywhere in the world.

Introduction To Islam - Part I

Being the Breath of the Prophet

The Use of Religious Figures in Cinema

The New Villains of Hollywood